Why Obama must be cautious on Syria

By Blake Hounshell, Special to CNN 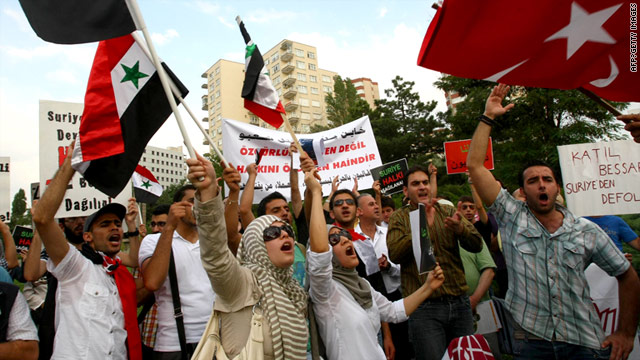 (CNN) -- As a brutal, bloody assault on anti-government protesters in Syria heads into its fourth day, pundits in Washington are training their rhetorical guns on President Barack Obama, lacerating his administration for its perceived paralysis.

The latest example is Elliot Abrams, a former official in the administations of Ronald Reagan and George W. Bush, who rips Washington's response to the uprising as "slow and unsteady" in Tuesday's Wall Street Journal. Danielle Pletka, in an overheated blog post Monday, argues that "finding ways to support the Syrian opposition, further isolate regime forces, cordon off Syria from the rest of the world, and begin the process of standing for freedom" in Syria is a "no brainer." Commentary writer Max Boot accuses Obama of "leading from behind" in Libya, thus emboldening Syria's Bashar al-Assad in his brutality.

And it's not just conservatives and neoconservatives who are expressing frustration. Hussein Ibish, a senior research fellow at the American Task Force on Palestine, criticizes the U.S. administration for vainly holding out hope for a "managed transition" in Syria, calling instead for "bolder actions aimed at regime change." Last week, U.S. Rep. Gary Ackerman, D-New York, demanded that Obama call for al-Assad's "immediate departure," and a group of Syrian exiles who met with Secretary of State Hillary Clinton asked the same.

Thus far, the Obama administration has been rightly cautious. For one thing, it's not up to the United States whether al-Assad stays or goes -- that's a choice only the Syrian people can make. And with no way to know whether a majority supports regime change, it would hardly be wise to declare al-Assad illegitimate and denounce dialogue with the government as folly without a critical mass of Syrians making it clear they felt the same.

Witnesses to violence in Hama, Syria

Second, the Syrian opposition is a bit of a mess right now. Years of repression inside the country and fragmentation outside of it has (understandably) made it hard for a motley crew of activists, professionals and ideologues from all over the world to band together around a common agenda. The State Department has been urging the opposition to choose official representatives and start laying out a serious agenda for a democratic transition so that the "silent majority" of Syrians who have sat out the protests begin to see it a viable alternative to al-Assad, but these things take time.

Finally, there is frankly little support in the United States for another adventure in the Middle East. Obama only reluctantly joined British, French and Arab calls for intervention in Libya once it became clear that Moammar Gadhafi was willing to unleash hell on the citizens of Benghazi, prompting an eleventh-hour authorization from the U.N. Security Council.

Nobody is contemplating anything remotely similar in Syria, but the Libya precedent looms large over discussions about what to do with al-Assad -- both in Washington and in foreign capitals that will be key to moving forward with meaningful pressure at the United Nations: Beijing, Brasilia, Moscow, New Delhi and Pretoria. Are Americans really willing to bear sole responsibility for another collapsed state in the Middle East? I doubt it. This is why Obama will need the support of neighboring countries, which would be directly affected by al-Assad's fall.

Al-Assad's regime is proving to be its own worst enemy. Its Ramadan assault has utterly failed to cow the protesters and has riveted the world's attention on the slaughter. On Sunday, Obama called the attacks on civilians "horrifying" and vowed to pursue a democratic transition; on Monday, Turkish President Abdullah Gul said the killings were "unacceptable" in the strongest comments yet by a Turkish official.

Even Russia, which has thus far resisted a mild U.N. resolution condemning the crackdown, issued a critical statement. But Arab states have remained silent, and only France and the United States have explicitly abandoned al-Assad. There is no international consensus on Syria yet.

There's certainly more the United States can do, from pushing harder at the United Nations to sanctioning a deeper swath of al-Assad's inner circle to exploring energy sanctions that will cut off a key source of revenue for the regime. A senior administration official told me the U.S. Embassy in Damascus is hard at work trying to convince al-Assad's allies in the business community that they could be targeted for sanctions unless they distance themselves from the government.

But it's facile to suggest that there are magic words Obama could say that would materially change the situation on the ground, or that it will be easy to bring al-Assad and his goons down.

Nobody feels good about watching helplessly as Syrian tanks gun down protesters on the streets of Hama. But pundits almost always tend to overestimate U.S. power to shape events. If al-Assad seems doomed, it is because courageous Syrians have risked their lives to defy him -- not because of anything the outside world has done. In the end, they will be the ones who show him the door.

The opinions expressed in this commentary are solely those of Blake Hounshell.