By Christine Owens, Special to CNN 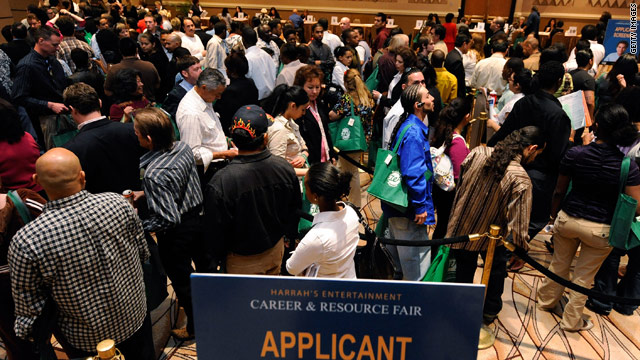 Applicants gather at a jobs fair in Las Vegas. Christine Owens says there are five unemployed workers for every job opening.
STORY HIGHLIGHTS

(CNN) -- It's Americans' chief concern. The biggest drain on our economy. The greatest threat to our future and our children's future. No, it's not the debt ceiling or the budget deficit. It's the jobs crisis -- the fact that we're stuck in a rut of tepid job growth and record high long-term unemployment, and seem hard pressed to do anything about it.

But instead of tackling the jobs crisis, the nation's leaders spent the last weeks embroiled in a protracted and infuriating debt ceiling debate, which at the last minute produced a deal that caps federal spending and creates a process to eventually achieve nearly $2.5 trillion in budget cuts over the next decade.

As so often seems to happen in Washington these days, it was the wrong debate and the wrong solution for our economy, and will weaken the recovery even further.

Let's start with where we were when the recent unpleasantness began. More than 25 million Americans were unemployed or underemployed in June. This number includes the officially unemployed, those working part-time because they can't get full-time hours, and others who want to work but aren't looking because prospects are bleak. The official unemployment rate is on the rise and has remained above 9% for all but two of the past 26 months.

Corporate profits have rebounded and coffers are flush, but job growth is abysmal. Employers added only a net 43,000 new jobs in May and June, with modest private sector growth -- 130,000 jobs gained -- offset by steep public sector losses -- 87,000 positions lost. It's no wonder why there are nearly five unemployed workers for every one job opening. Even temporary employment, a bellwether of job market recovery, has declined for three consecutive months. And workers' hours are flat, and their wages falling.

Fast forward to the last few days, when a spate of discouraging economic reports punctuated the debt ceiling drama. A contraction in manufacturing activity. Faltering GDP growth in the first half of the year. A decline in consumer spending and personal incomes. And word Wednesday that July was the third straight month of a surge in layoffs.

Although the monthly employment report to be released on Friday could bring a respite from this otherwise dreary drumbeat, no one seriously expects a meaningful turnaround any time soon. And the debt deal is likely to make matters worse, for two reasons.

First, the cuts in federal spending the deal contemplates will sideline the federal government as an economic player, significantly handicapping the recovery. Already this year, state and local governments have shed 162,000 workers, and more cuts were expected even before the debt deal.

Looking ahead, it's expected that in 2012 alone, the reduction in GDP caused by the budget cuts will result in 323,000 fewer jobs relative to current budget policy, according to estimates from the Economic Policy Institute. Federal cuts in nondefense discretionary spending, and corresponding trickle-down cuts at the state level, will mean less investment in rebuilding our crumbling infrastructure, fewer teachers and police and firefighters, and less for child care, nutrition and education -- among others -- all at a cost not only to jobs, but also to our ability to rebuild a strong economy that can compete with any in the world.

Second, unlike the "grand bargain" President Obama initially sought, the final debt ceiling deal does not include a renewal of the federal unemployment insurance programs that were first put in place several months into the recession.

These programs, slated to expire at the end of the year, have provided an essential lifeline of support for millions of unemployed workers still unable to find work after exhausting their state unemployment insurance. And, because unemployed workers spend what they receive on basic necessities, these programs have provided a vital boost for our local and national economies: Every dollar spent in federal unemployment benefits generates two dollars in economic growth.

President Obama recently called for renewal of the federal unemployment insurance programs before they expire, and he is right to do so. We have never ended a federal unemployment insurance program when joblessness was so high, nor withdrawn such vital stimulus when the economy remained so precarious. Allowing the federal programs to lapse means that in the first few months of 2012, as many as 2 million unemployed workers, and likely more, will be cut off of unemployment benefits before they can find work.

The cost of renewing our federal unemployment insurance programs is modest. The Congressional Budget Office estimates the price for extending federal benefits through 2012 is only $45 billion.

At a time when most everything is on the chopping block, these federal dollars are a sound investment and do exactly what they are supposed to do: help workers subsist after they've lost jobs through no fault of their own, while stabilizing and boosting the economy. Allowing these programs to lapse would exact a greater toll from those families who are already paying heavily for Washington's failure to get serious about putting America back to work.

The opinions expressed in this commentary are solely those of Christine Owens.