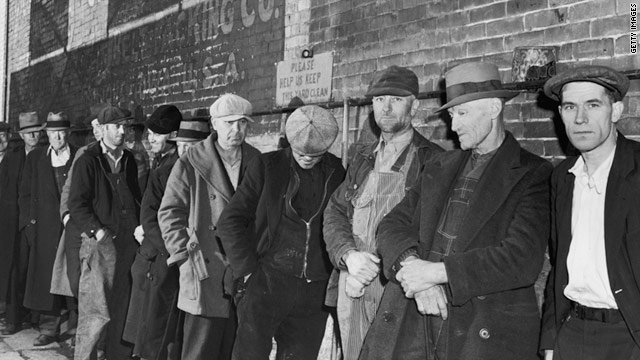 Unemployed men in Iowa line up for food during the Great Depression, circa 1935.
STORY HIGHLIGHTS

Washington (CNN) -- A week of bad economic news has led some economists to worry: Is it 1937 all over again?

Here's the background to the worries:

As everyone knows, the global economy plunged into a great depression at the end of the 1920s. In the United States, the Great Depression hit bottom in early 1933. The years from 1933 through 1936 were years of economic recovery.

This past week of bad economic news raises fears that history might repeat itself, with a second slide into recession after the terrible collapse of 2008-2009.

But here's my worry: Even if we avoid a second recessionary dip, we're stuck on a very, very disappointing path. Call it the 1936 parallel.

From 1933 to 1936, the U.S. economy grew strongly, almost 10% a year. When supporters of President Franklin D. Roosevelt sang "Happy days are here again," they had reason to celebrate. By the end of 1936, U.S. output of goods and services had returned to 1929 levels. Corporate profits were surging. $100 invested in the stock market at the end of January 1933 would have multiplied to almost $350 in January 1937.

Yet even before that second slump, one economic indicator remained ghastly: unemployment. Even as output boomed, markets soared and profits bulged, an estimated 17% of Americans remained out of work.

Today likewise, things have returned more or less to normal for the affluent -- without taking much of a bite out of the unemployment numbers.

In fact, on our current trajectory, the U.S. will catch up to 2007 levels of economic output sometime in the next couple of months. Yet at the current job creation rate of a little north of 100,000 jobs per month, the U.S. economy will not recover its 2008-2009 job losses until the middle of the decade. And because so many distressed workers have quit the labor force altogether, the pace of job creation would have to double for the U.S. to see total employment rates return to pre-crisis levels before 2015.

1. This past recession delivered its hardest blow to some especially labor-intensive industries: construction and retailing. Even as economic activity recovers, we're not going to see lots of new home building. Nor will we see people using their cash-out refinancings to go shopping at Best Buy. Americans are saving again. Those who have jobs are paying down debt.

3. A catastrophic experience like the 2008-2009 recession changes an employer's expectations about the future. Caution and self-protection become the guiding rules of business management. Companies decide it's safer to have one worker too few than one too many. They may not recover their exuberance and optimism for years.

4. Last and most important: The economy, although growing, is not growing very fast. The rule of thumb is to reduce unemployment by 1 point, the economy must grow 2 points over trend. Right now, the U.S. economy is still growing below trend. The engine is just not revving fast enough to move the car.

Then there's public policy. Employers must fear that the future probably holds heavier taxes, more regulation and higher employee health care costs. The outlook might be worse under a President Obama than a President Romney, but it looks sufficiently ugly either way.

As I said: That's the optimistic scenario, the 1936 scenario.

Don't get me started on the other.