If investors leave, the 1930s could return

By Charles Geisst, Special to CNN 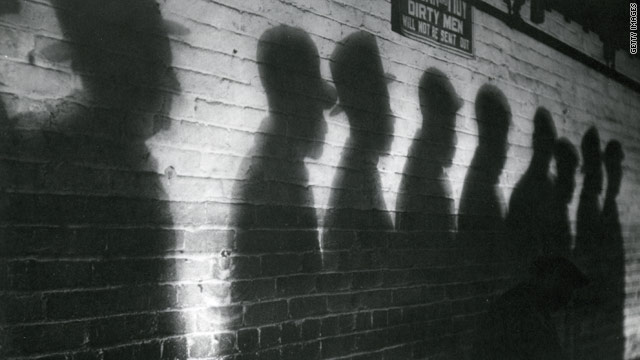 Shadows on a wall in 1930 Cincinnati, Ohio, belong to men in a bread line during the Great Depression.
STORY HIGHLIGHTS

Editor's note: Charles R. Geisst has written 18 books on finance and economics and holds the Ambassador Charles A. Gargano Chair in Global Economics at Manhattan College. His latest book is an expanded "Wall Street: A History: From Its Beginnings to the Fall of Enron."

(CNN) -- The events look and sound familiar. A stock market collapse and a debt crisis forced the United States into dire economic circumstances that no one anticipated. At congressional hearings on the causes of the crisis, investors testified that their brokers had sold them bonds, assumed to be safe, only to discover that they were worth even less than stocks. That destruction of wealth had profound and long-lasting repercussions for the markets.

Almost 20 years to be accurate. The crisis, of course, began in 1929 and lasted 10 years, until the outbreak of World War II. But the effects lasted until the Korean War and the beginning of the Eisenhower administration.

Wall Street suffered 20 years in the desert before regaining its traditional foothold in the American economy. Brokers and investment bankers became pariahs. Their testimonies before congressional committees only reinforced the impression that they had something to hide. Politics and public opinion were firmly against them. Politicians legislated against them and the public voted by closing its purse.

All of this is familiar in the current crisis, but the story only begins here. The most damaging outcome of the Great Depression was the collapse of investor confidence and its effect on raising new capital for corporations. No one was interested in investing in a new issue of stock or new bonds if the Wall Street underwriters could not be trusted.

As a result, capital investment flagged badly until the post-war revival. Even during World War II, the Roosevelt administration distrusted Wall Street so much that it effectively relegated it to a secondary role in financing the massive amount of war bonds necessary to conduct the war.

In the contemporary world, putting money under a mattress is not considered an investment option. But investor confidence in the stock market has been badly shaken while the market for quality bonds has benefited.

This is where the parallels between the 1930s crisis and today's crisis become unsettling. Future growth in all sectors of the economy ultimately depends on investors. Their opinions on the crisis can be seen in the high price of gold, a rapidly declining (and volatile) stock market, and declining bond yields. Market volatility impoverishes more investors than it enriches. Ultimately, it just scares them away when they are needed most.

Last week's downgrade of U.S. debt by Standard & Poor's pulls the rug out from under the last bastion of investor confidence, at least temporarily. The bond markets have shrugged it off because they know that if Treasuries come under pressure, chaos will prevail. Investors will have nowhere left to invest. Gold at $1,600 per ounce is not an investment, it is a defensive store of value and a dubious one at that.

Another bear market in stocks is forcing even more investors into low-yield Treasury securities where some yields already have turned negative. Commodities have mostly run their gauntlet, leaving many with sizeable losses after the run-up in prices over the last two years.

In the 1930s, capital investment sank to pitiful levels, causing the Depression to linger until the war. It is at low levels again and will not show substantial signs of increasing in the uncertain environment.

Volatile markets are the enemies of new capital issues in either stocks or corporate bonds. This will be the legacy of the Standard & Poor's decision. Creating uncertainty in the middle of a severe recession may be justified by economic and financial arguments but it is still irresponsible.

Stock market problems since the beginning of the 20th century have been accompanied by severe problems in the credit and bank markets. The consumer spending boom of the 1920s ended badly when the stock market crashed. Unlike many collapses that followed, it was the only one that created longstanding, systemic problems for the economy, until recently.

Highly leveraged financing by conglomerates led to problems in the 1960s. The 1987 crash was accompanied by problems with the S & Ls, leading to a recession. The drop after the 9/11 attacks was severe and had similar, but short-term, consequences. But the current crisis since 2008 is in the same league as the 1930s because of the new, interconnecting relationships in the financial sector caused by the deregulation of 1999. They are creating systemic problems of their own that have yet to be worked out.

No one is suggesting that Standard & Poor's should have been quiet about the problem they think the U.S. government faces. Whether it is a valid assumption is an issue that time will sort out. But the great irony is that it has caused the volatility that has wiped out several trillions of investor wealth, at least for the time being. If the situation remains unchanged, the U.S. Treasury certainly will have a problem, collecting less tax in the future because of the diminution of wealth, helping create a self-fulfilling prophecy.

Strong bull markets usually end badly for a large number of investors. Volatile markets dissuade them from investing in anything but safe investments. If they believe that there is nowhere left to invest, the consequences will be of 1930s proportions. Stock markets hate uncertainty, goes the time-worn phrase. That is because investors abhor the destruction of their wealth, especially if it is seen as being caused by bad politics.

The opinions expressed in this commentary are solely those of Charles Geisst.