Editor's note: Roland Martin is a syndicated columnist and author of "The First: President Barack Obama's Road to the White House." He is a commentator for the TV One cable network and host/managing editor of its Sunday morning news show, "Washington Watch with Roland Martin."

(CNN) -- In all of my years covering politics on the local, state and national level, many stories have earned the "Are you serious?" look.

The newest one? The so-called sexist cover of Newsweek depicting Rep. Michele Bachmann.

Conservatives have been up in arms, slamming the "liberal" Tina Brown and Newsweek for choosing a photo that supposedly depicts Bachmann as the political equivalent of Jack Nicholson in "The Shining."

To the angry conservatives, and delusional feminists, give it a rest. There is nothing sexist about the photo, nor does it reveal a flaming liberal bias. But this is the perfect cable news story. We are treated to fake outrage; condemnations from conservatives and feminist voices; nonsensical shouts of "They wouldn't do this to a man." And then it all goes away.

In fact, Newsweek should be ripped to shreds because the photo doesn't even go with the headline, "Queen of Rage." 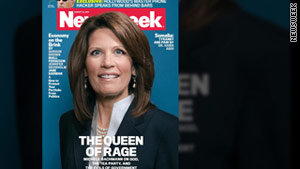 I've run three weekly newspapers, and I can tell you that if I wanted to show a person full of rage, I wouldn't pick the crummy photo Newsweek chose.

When I ran the Dallas Weekly, I wrote a cover story on Khalid Muhammad, former national spokesman for the Nation of Islam. I ran a photo of him preaching, and his face had a serious scowl; he was sweating like crazy -- it was taken in Jasper, Texas, where James Byrd Jr. was dragged to his death behind a pickup truck -- and he was wearing military fatigues.

Now that image went perfectly with the headline of someone full of rage.

The eyes have it

Bachmann: Geithner should be fired

But let's not act like Rep. Bachmann hasn't used anger at the political system to her advantage. She rails against one thing or another every day. She's not a nut case like Glenn Beck, but she has no doubt employed anger against President Barack Obama and liberals to become a darling of the tea party and a reliable provider of a quality sound bite.

Now when I see stories discussing her makeup and whether she is sexier than Sarah Palin, hell yes, that's sexist. Even trying to suggest she will take Palin's supporters implies that she can only compete for women voters.

Is that Newsweek cover any worse than any column by Maureen Dowd of The New York Times challenging the manhood of President Obama?

But folks, get a grip. If media writers can openly opine about whether President George H.W. Bush is a wimp; if Mitt Romney is soulless; if Tim Pawlenty is Mr. Boring; then surely we don't have to lose our minds and come up with a faux sexist narrative about Newsweek's Bachmann cover.

Maybe media types needed this story so they don't have to cover something far more substantive. Say, like a falling economy while the idiots in Congress chill for a month.

Now that's something to be angry about.

The opinions in this commentary are solely those of Roland Martin.