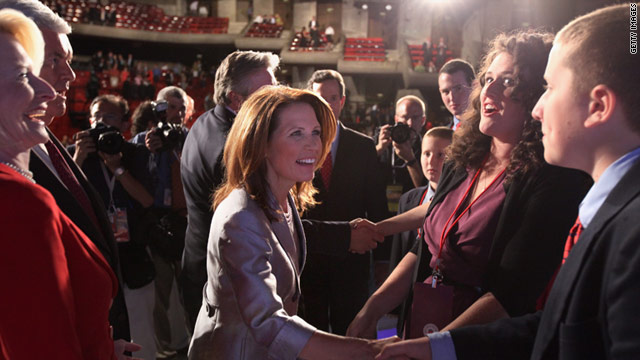 Journalist Byron York asked presidential candidate Michele Bachmann if she would be submissive to her husband as president.
STORY HIGHLIGHTS

Editor's note: Roland Martin is a syndicated columnist and author of "The First: President Barack Obama's Road to the White House." He is a commentator for the TV One cable network and host/managing editor of its Sunday morning news show, "Washington Watch with Roland Martin."

(CNN) -- While a lot of the focus after Thursday's Republican debate was on Newt Gingrich snapping at Fox News Channel's Chris Wallace for asking "gotcha" and "Mickey Mouse" questions, what I found the most offensive one of the night was Byron York questioning Rep. Michelle Bachmann with regards to submission.

As someone who didn't find the sexism in the Newsweek cover photo flap, I believe there is no doubt that the reason York only questioned Bachmann on submission had everything to do with her gender.

York's question was: "In 2006, when you were running for Congress, you described a moment in your life when your husband said you should study for a degree in tax law. You said you hated the idea. And then you explained, "But the Lord said, 'Be submissive. Wives, you are to be submissive to your husbands.' "

"As president, would you be submissive to your husband?"

Bachmann answered, in part: "Marcus and I will be married for 33 years this September 10th. I'm in love with him. I'm so proud of him. And both he and I -- what submission means to us, if that's what your question is, it means respect.

"I respect my husband. He's a wonderful, godly man, and a great father. And he respects me as his wife."

Some of my Twitter and Facebook followers say the question was appropriate because Bachmann has touted her Christian faith throughout her presidential run, and has spoken publicly about submitting to her husband.

Yet former Pennsylvania Sen. Rick Santorum tried his best to imitate former GOP presidential candidate, the Rev. Pat Robertson, and no one questioned him specifically about whether he loves his wife like Christ loved the church (that's in the same section of Ephesians 5 as Scripture discussing wives submitting to their husband).

Gov. Rick Perry just held a large prayer rally. Will he be questioned specifically about tenets of his faith? Will Herman Cain be asked whether he curses (the Bible speaks to that)?

When we look at many of the vital issues facing this country -- a rough economy, massive unemployment, wars in Iraq and Afghanistan, a continuing battle against terrorism, a fierce climate change debate, and a battle to get the nation's debt under control -- who in their right mind would waste time during a nationally-televised debate asking the only female GOP candidate about whether she would submit to her husband in the White House?

From a religious standpoint, I understand and get submission, even writing about it in my book, "Listening to the Spirit Within: 50 Perspectives on Faith."

For me, submission begins with me as a husband. When my wife knows that I'm willing to seek God's direction for my life, she knows that I'm not making crazy decisions. So she is willing to trust my judgment on various matters. And in doing so, I'm willing to trust that God has put me with the right woman, and I can trust her decisions, and that she will do what's best for both of us. This has nothing to do with losing your own mind as a woman. It is about following what Ephesians 5:21 says: "Submit to one another out of reverence for Christ."

It really is an issue that has to be fully explained to people and not taken as, "I tell you what to do, and you follow what I say."

That seems to be what York was trying to insinuate. The notion of submission can be seen in many different forms. Already, Bachmann is taking heat because she sees submission as respect. One of the best books I've read on the topic is P.B. Wilson's "Liberated Through Submission: God's Design for Freedom in All Relationships." If you desire to learn more on the issue, by all means, read, study, and listen. But don't think for a second you can fully address the issue in a presidential debate with others on the stage.

But the most important thing that folks must accept is that submission is a personal part of someone's faith. If York was trying to get at whether Bachmann would follow the advice of her husband on all matters, he needs to understand that if she was president, that role is her job. And on her job, she has final say-so. The only oath that a president is sworn to uphold is the one in the U.S. Constitution.

I don't think for a second that a woman questioner would ask such a question in a presidential debate.

What York and others must understand that if you're unwilling to question a man about tenets of his faith, then don't have a different standard for a female candidate.