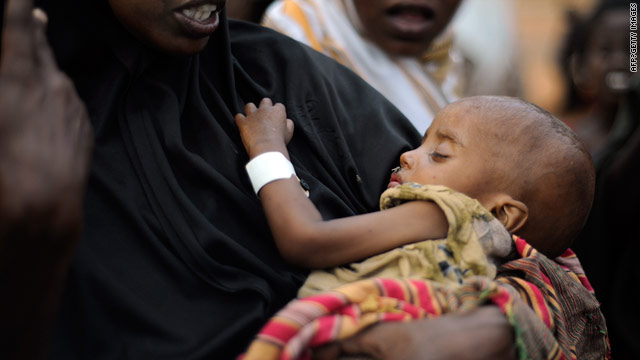 An emaciated child is among the displaced Somalis at the Dadaab refugee complex last month in eastern Kenya.
STORY HIGHLIGHTS

Editor's note: Jens David Ohlin is associate professor of law at Cornell Law School and the co-author (with George Fletcher) of "Defending Humanity: When Force is Justified and Why" (Oxford University Press, 2008).

(CNN) -- Somalia is known to most Americans as the setting for the book and film "Black Hawk Down" and as the world center for modern-day pirates. It is the poster child for failed humanitarian interventions and for good intentions gone wrong.

But none of that should blind Americans to the horrific humanitarian crisis developing in Somalia, a growing famine that threatens to kill hundreds of thousands of people if they do not receive help from the international community.

Of course, many of the problems that doomed the U.S. intervention in 1992, and led to "Black Hawk Down," remain. Despite years of diplomatic efforts, Somalia persists in a state of near anarchy. The central government controls only a fraction of the country, and warlords with private militia still battle each other for control of territory and trade. Now, an Islamic insurgency has further eroded security in the region, and organized groups of pirates use Somalia's anarchy as a launching point for raids against merchant vessels.

A humanitarian intervention in Somalia might be politically difficult for President Barack Obama to justify. With U.S. commitments in Afghanistan and Iraq, as well as military operations in Libya continuing without congressional approval, Obama has likely used up his political capital.

But this does not mean that there are no options. The U.N. Security Council can -- and should -- refer the situation to the chief prosecutor of the International Criminal Court for a full investigation into crimes against humanity in Somalia.

In the past, relief agencies have called famines and world hunger a crime against humanity. After all, the right to food is a universally recognized human right. Therefore, the argument goes, if people are dying from a lack of food and potable water, somebody must be responsible and it must be a crime. A crime against humanity sounds just about right.

That being said, there is a solid, sober and black-letter rationale for referring this case to the International Criminal Court. Several witnesses have publicly said that they were prevented from leaving the region by armed members of Al-Shabaab, the Islamic insurgent group battling for control of the country. According to these accounts, Al-Shabaab soldiers have set up an internment camp and have imprisoned people to prevent them from leaving. If these allegations are true, they could constitute a solid basis for an indictment for crimes against humanity.

International law defines crimes against humanity as a widespread or systematic attack against a civilian population. The attack can take one of many forms, including murder, enslavement and deportation. Another example is "imprisonment or other severe deprivation of physical liberty in violation of fundamental rules of international law," according to the statute of the International Criminal Court.

Some international courts have also imposed an additional requirement for prosecuting crimes against humanity: The attack must be made pursuant to a state or organizational plan or policy. In the past, an "organizational policy" referred to entities such as the Gestapo in Nazi Germany that perpetrated crimes against their own citizens.

In the case of Somalia, Al-Shabaab could be considered an "organization" with a deliberate policy of preventing civilians from leaving their territory. Al-Shabaab has a powerful incentive to prevent Somalis from voting with their feet: It would deprive the insurgency of valuable legitimacy if its population is slowly drained away.

Members of the Security Council need to act. They don't need to authorize military force -- just a criminal investigation. They don't need to accept any of the aspirational theories about famine as a violation of international law. They only have to read the legal definition of crimes against humanity.

The opinions expressed in this commentary are solely those of Jens David Ohlin.