How Arab youth found their voice

By Ibrahim Mothana, Special to CNN 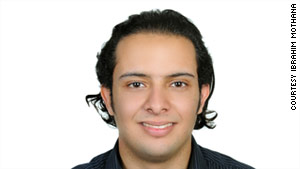 Ibrahim Mothana is a 22-year-old activist, writer and a community worker from Yemen. He is a youth ambassador for the Arab Thought Foundation. Follow him on Twitter: @imothanaYemen.

When Mohamed Bouazizi set himself on fire in Tunisia in January, he did not only ignite a series of unpredicted revolts but also heralded the first appearance of Arab youth on the stage of modern history.

Young people in the Arab world, who had been undermined and perceived as a development burden on the region, became a promise of progress in a new era.

Young people suddenly felt as if a new dimension was discovered through which they could mobilize. They finally exercised their rights and, more importantly, said "never again" to the era of absolute domination and authoritarian regimes.

Their ambitions led them to sacrifice their lives while calling for the replacement of the humiliation and dehumanization they have long experienced with human rights, democracy, equality and legitimate governance.

Millions of youth like me who lived an entire life under one autocratic ruler suddenly changed from being subjects in a society where public opinion didn't matter to being citizens reconfiguring the political, cultural and media spheres.

I received a warm welcome every time protesters found out I was from Yemen, and many insisted on inviting me for a "freedom tea."
--Ibrahim Mothana, on his visit to Egypt

With these movements, a few months of the Arab Spring created a sense of Arab solidarity that decades of political rhetoric and ideological slogans failed to achieve.

I was lucky to visit Tunisia, Libya, Egypt and other Arab countries a few months before the uprising and then witness after that how those historical moments reshaped the identity of young people living in these countries.

Visiting Cairo again in July during the renewed protests was a completely new experience and I could not feel this sense of solidarity anywhere more than in Tahrir Square.

I received exceptional greetings and a warm welcome every time protesters found out I was from Yemen, and many of them insisted on inviting me for a "freedom tea" during which we had endless discussions about the situation in Yemen and the progress of the revolution.

Everyone was surprisingly well-informed and up-to-date with the events in every Arab country going through a process of profound changes and reform. I felt as if Cairo's Tahrir was the headquarters of the Arab uprising.

The dramatic shift in how young people in different countries recognize each other is astonishing. In the past our ties were shallow and negatively affected by numerous crises and conflicts we witnessed in the past decades, offering youth more reasons to disagree and even demonize each other in many cases.

But now a strong sense of mutual struggle and shared noble goals emerged. It is a feeling spontaneously arising from sharing similar grievances and from the need to address them through peaceful and democratic reform. These fostered mutual concerns and ambitions were present in all the youth I met in Cairo, Amman, Beirut and other Arab cities I visited recently.

In addition to strengthening their ties and asserting their commonalities, the Arab Spring created a new identity for young people living in the region. It gave them a dose of self-confidence and changed their attitudes; instead of simply blaming the status quo, they have come to strive to change it.

Even in monarchies, the number of social and political taboos that were broken is outstanding. The women driving campaign in Saudi Arabia and the hashtag debates in Jordan are examples of the outreach of Arab Spring influence in countries that did not experience revolts.

Young people now are more willing to express their opinions and to be proactive in influencing their societies in whatever context they are living in and are clearly showing support for their fellow Arabs struggling in other countries.

In the past our ties were shallow and negatively affected by numerous crises and conflicts.
--Ibrahim Mothana

Marches, events and online campaigns supporting the freedom of people in Syria, Libya, Yemen have been continuous in the past months. Moreover, citizen journalists throughout the region played an important role in spreading the word and exposing human right violations through Twitter, Facebook, YouTube and other social media.

And it is not only bread and material needs, as has been commonly portrayed, that caused the youth awakening and brought about change in these societies that were long denied freedom and opportunities; but rather more importantly, it is the indignities that ordinary citizens have experienced and their inability to exercise their political and social rights.

Thus the slogans of all the protests in the region were all about constitutional changes, rule of law and equality. Arab citizens are working to define themselves rather than be defined by authoritarian regimes or oversimplified Orientalist views. Such a process will definitely take time and require sacrifices, but the outcome on the long term will indisputably be a more prosperous region and empowered nations.

For me, as someone who had the blessing of living through such remarkable moments, the Arab Spring seems to be a resurrection of the Arab youth from the grave of marginalization and repression into an era of a homegrown renaissance.

When our lives seemed to be going towards a dead-end of frustration and video games, the Arab Spring offered the possibility for the first time of a life we could look forward to living.

The opinions expressed in this commentary are solely those of Ibrahim Mothana.