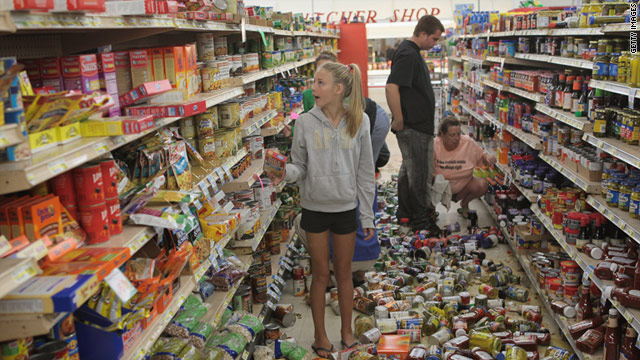 Editor's note: Christa von Hillebrandt-Andrade is manager of the Caribbean Tsunami Warning Program of the U.S. National Weather Service and president of the Seismological Society of America.

Mayaguez, Puerto Rico (CNN) -- The East Coast of the United States was shaken up by a moderate earthquake on Tuesday that was felt from Maine to Florida, Virginia to Illinois. On TV we saw people run out of buildings, thinking it might be a terrorist attack. Social media was buzzing with comments and testimonies.

Although seismologists, historians and emergency managers have recognized the potential for an earthquake along the East Coast for years, most people were caught by surprise and so responded inappropriately. The ground doesn't shake as much in the East as it does in California, Alaska, the Pacific Northwest, Puerto Rico or the Virgin Islands. But because of the great concentration of population and infrastructure in the East, it's an area of immense risk.

Since earthquakes are infrequent in this region, most people don't know earthquake preparedness measures. Instead of running out of buildings, they should have dropped, covered and held on. Earthquakes are natural phenomena that become disasters when we don't prepare adequately -- or are not educated in proper measures.

The 2004 tsunami is an example of a rare event catching people unprepared, with catastrophic results. In December of that year, more than 230,000 lives were lost in countries around the Indian Ocean. Residents and tourists were taken by surprise -- they were not warned, nor did they recognize the natural signs.

Just this past March, Japan was struck by a tsunami much larger than any in historical memory. Although the country had a state-of-the-art tsunami warning system -- which indeed saved tens of thousands of lives -- the infrequency of such a mega-tsunami led many to underestimate the threat.

In the Caribbean, we have been working for almost 15 years on our "forgotten danger," tsunamis, which have claimed over 3,510 people just in the past 160 years, more than in Alaska, Hawaii and the West Coast of the US during the same time period. But we still do not have a tsunami warning center in the region.

In earthquake country, children are taught and practice in schools to "drop, cover and hold." Radio and TV announcements and newspapers remind people they need to practice sound earthquake design, anchor down furniture, have insurance and be ready to be on their own for many hours, if not days, when a big one strikes. Earthquakes become part of the culture.

Just the way people who live in the Eastern United States prepare for hurricanes, storms and terrorist attacks, the region needs to become earthquake-ready. This could save their lives at home, in another part of the country or the world.

In 2004, Tilly Smith, a 10-year-old girl from England vacationing in Indonesia, saved countless lives because she had learned in school about tsunamis, recognized the natural warning signs and, with her mother, guided people to safety. Earthquake and tsunami education and preparedness is important for all, everywhere.

Just as individuals need to prepare, local, state and federal government officials need to perform earthquake hazard assessments to determine and enforce building codes and take other measures to protect lives and property. As we saw on Tuesday, earthquakes can and will strike at any moment. We can't afford to let their infrequency lull us into inaction. This earthquake was a wake-up call.

The opinions in this commentary are solely those of Christa von Hillebrandt-Andrade.