When will we ever learn the lessons of hurricanes? 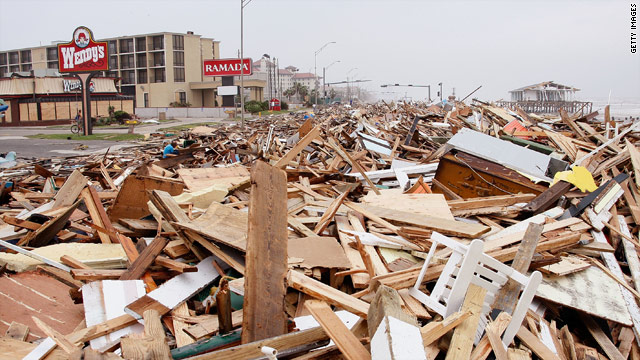 Editor's note: Orrin Pilkey is the James B. Duke Professor Emeritus of Earth Science at Duke University. His latest co-authored books are "Global Climate Change: A Primer" (Duke) and "The World's Beaches" (University of California Press).

(CNN) -- As I write this, Hurricane Irene is on its way up the U.S. East Coast and, if the storm follows the current path projections, one thing is certain. Many buildings are soon to be destroyed -- perhaps numbering in the hundreds - and thousands more will be damaged.

Dozens of artificial beaches -- nourished beaches that cost millions of dollars per mile -- will be narrowed and some will disappear altogether including possibly some that are a few months old like the new beach at Nags Head, North Carolina.

Beachfront roads, like segments of Highway 12 on the Outer Banks of North Carolina, are likely to be wiped out. Sea walls will be damaged or destroyed along the East Coast from north Florida up and lots of sand and debris will cover the streets of larger coastal towns such as Virginia Beach.

A number of small communities along estuarine shorelines of the Carolinas are sure to be flooded. If Irene continues up the coast to New Jersey and even New England the damage will be even more impressive.

Unfortunately some people will die. State emergency officials on the North Carolina Outer Banks efficiently evacuate tourists, but local, year round people often stay. The refrain is that "we've been through this before." This however, may not be the case with this storm, as large and slow moving as it is.

When the storm has passed there will be a wave of sympathy for the many families and businesses that will be affected. In the beach communities, patriotism will prevail, American flags will be unfurled on makeshift flag poles and the dominant attitude will be: "we're tough and were coming back." I've witnessed this a dozen times. A better attitude is "we've learned a lesson, let's build elsewhere."

FEMA, a much-improved agency since Hurricane Katrina, will be on the scene immediately with aid and emergency provisions. In the longer term FEMA will provide money, loans or flood insurance to rebuild, clean up beaches and towns, repair the roads, water and sewer lines and other infrastructure and eventually return life almost to normal.

Why hurricane hunters fly into storms

Eastern Seaboard braces for Irene
How long will it take the public to learn that beachfront construction is a fool's act?
--Orrin H. Pilkey
RELATED TOPICS

Almost is an important characterization because, in fact, historically, the most recent hurricanes hitting the East Coast -- Hugo (1989) and Fran (1996) for example -- have been urban renewal projects. Small beach cottages, destroyed or damaged, are replaced by larger buildings and sometimes even high rises. And the new buildings are placed on property that is now more susceptible to storms than before because the shoreline is closer and the dunes are gone.

Recognizing the futility (and stupidity) of rebuilding in very dangerous places, the states of North Carolina and South Carolina both instituted policies of not allowing buildings in beach communities to be replaced if destroyed by storms. Property owners went to court, important people were offended, politicians got into the mix and the approach did not work in either state.

"When will we ever learn" as the song goes. Why spend federal and state money to bring back roads, water and sewer lines, bridges and beaches in locations where we know for certain that storms occurred in the past and will soon occur again in the future; storms that will destroy the communities.

How long will it take the public to learn that beachfront construction is a fool's act and that we should not be responsible for such foolish acts. Ironically, although the affected beachfront property owners may lack common sense, they do not lack for money and influence, which of course is one reason that we repeatedly bail them out.

After Hurricane Irene the time may come to take a deep breath and in this era of tight budgets, ask why are we bailing these people out once again? Those who study global change argue that more intense storms are on the way along with a rising sea level. No better time than now to come to our senses.

The opinions expressed in this commentary are solely those of Orrin H. Pilkey.