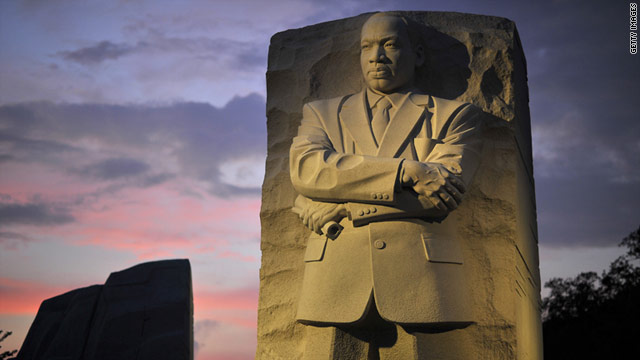 The dedication of the Martin Luther King Jr. Memorial in Washington was postponed because of Hurricane Irene.
STORY HIGHLIGHTS

Editor's note: Roland S. Martin is a syndicated columnist and author of "The First: President Barack Obama's Road to the White House." He is a commentator for TV One cable network and host/managing editor of its Sunday morning news show, "Washington Watch with Roland Martin."

Washington (CNN) -- It's only fitting that during the week we were to dedicate the memorial in Washington to the Rev. Martin Luther King Jr., an earthquake would hit the region and the entire East Coast would be bracing itself for a hurricane.

When we think about the enormity of King's work, in which he gave his life, as well as the many folks who also fought in the civil rights movement, we realize that their actions struck at this nation's core with a ferocity never seen before.

Some critics of the King Memorial claim that because he wasn't a president, he doesn't deserve such an honor on the National Mall. But that isn't so, and we should forever be thankful for Alpha Phi Alpha Fraternity Inc. -- King's fraternity and mine -- for leading the effort over the past 25 years to make this happen.

It is important to understand that King's place on the mall is appropriate.

But out of all of these men, it took a King to force America to live up to its ideals. Americans loved to recite the Declaration of Independence and the U.S. Constitution, but for many, those were simply words.

People really didn't understand what it meant to be an American until King and many domestics, postal workers, day laborers, doctors and lawyers forced the nation to make equal rights happen.

So when Americans now travel to the nation's capital, they can pay homage to a great man who was serious about his work, serious about the plight of the poor and the disenfranchised and serious about making America better.

What should inspire all who see it is that no matter your station in life, you can make a difference. King was just 25 when he was drafted into the movement.

If there is something in your community that needs to be addressed, do it. Don't wait. Don't whine. Don't complain. Don't pass the buck.

Just be willing to serve, care and do it out of love and compassion.