Why Oscar Pistorius deserves to run

By Ford Vox, Special to CNN 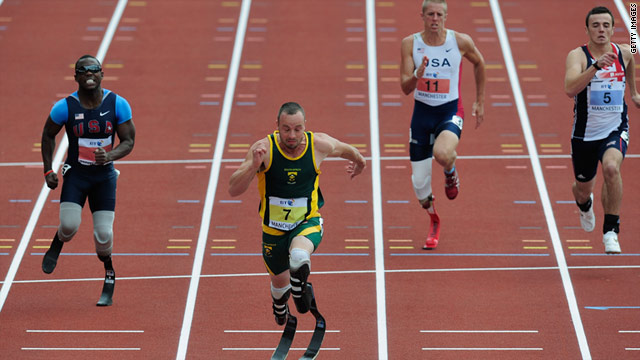 Boston (CNN) -- A man born without functioning legs ran the 400 meters in 45.07 seconds on July 19, 2011, the fastest time recorded by an amputee. The ripple effects of this historic achievement may initiate a paradigm shift in how we view our bodies.

That's because any time under 45.25 seconds is good enough to earn a spot in the London Olympics next summer, and the July race qualified 24-year-old Oscar Pistorius to represent the South African track team in the World Championships in Athletics starting Sunday with the 400 meter heats in Daegu, South Korea.

Pistorius will need to run one more time under 45.25 seconds in the first half of 2012 before finally earning his spot in the Olympics, and at this point most observers believe he will make it.

The Olympics was a dream painfully deferred in 2008 when Pistorius missed his qualifying time for Beijing by 0.7 seconds after finally winning out in a drawn-out battle of physiology experts. The International Association of Athletics Federations, the governing body for track and field sports, ultimately agreed to overturn its own 2007 decision disqualifying Pistorius and his prosthetic legs.

The IAAF's 2007 statement that prosthetic legs would sully the "purity" of sport was based on flawed research by the German Sport University Cologne that found Pistorius needed less energy to run than did athletes on normal legs. But the German testing failed to take into account such basics of sprinting physiology as the importance of anaerobic metabolism. The bulk of the energy used in a 400 meters is burned without the aid of oxygen, says Hugh Herr, an MIT scientist who helped school the IAAF.

Carbon-fiber legs on this champion

If prosthetics do give Pistorius an edge in the 400 meters, nobody's found a way to prove it.

"To accurately determine the level of anaerobic consumption during a sprint race," Herr says, "you'd have to cut someone open. It's nearly impossible to conceive. I guess there wasn't a physiologist at Cologne who was aware of that fact."

There's no question that Pistorius could not compete against able-bodied athletes in the 400 meters without advances in prosthetic materials over the past 15 years. The carbon fiber backbone of his Ossur Flex-Foot Cheetah prosthetics is a common ingredient in many orthotics and prosthetics, known for storing and releasing much of the kinetic energy you put into it. They're an approximation of the natural energy storage functions of muscle and tendon, but from the perspective of anyone who works with people to minimize the impact of impairments caused by amputated or paralyzed limbs, the contention that carbon fiber technology gives an unfair boost seems laughable.

Even odder are the claims that runners on prosthetic limbs aren't as subject to injuries, given that they are missing feet, ankles and sometimes knees as well. Tell that to anyone that's ever been to a prosthetics clinic and dealt with the numerous complications of fit and form the imperfect technology leaves us with. There is endless tinkering to get things right. The statistics bear this out: Paralympic athletes endure nearly 60% more injuries than able-bodied runners.

Pistorius's chief advantage is the early age his parents started him on prosthetic legs. Prosthetics are sometimes necessary in Pistorius' congenital condition, fibular hemimelia, a developmental absence or shortening of one of the two lower leg bones linked with other malformations that can be so severe amputation is therapeutic.

If a child will ultimately require prosthetics, it's ideal to start using them younger for the same reason that it's better to learn languages in childhood -- early learning benefits from more resilient and speedy neural networks. The kid I saw in her stroller recently, face aglow with the light of her iPhone, fingers tapping away at a speed that blurs their movement, is probably readying herself for the competitions of her adulthood too.

Hugh Herr directs the Biomechatronics Laboratory at MIT, a group responsible for a number of prosthetic innovations, some of which are making it via his own company (iWalk). He said the reactions to Pistorius' entry into normal sport, from mere hand-wringing to outright disdain and dismay, reveal that we live in a "cell and tissue centric society."

What makes nature intrinsically alright, and what makes our technology and our willpower to overcome our nature, to repair and rehabilitate ourselves, invalidate our full return to society and to competition?
--Ford Vox
RELATED TOPICS

He's hoping that Pistorius' high-profile competitions will help move us toward an evolution in social consciousness: accepting the validity and equality of synthetic body parts just as we do different races and genders.

Of course prosthetics can be designed that would give unfair advantage in competitive sport: attaching wheels, for example, but down the line Herr believes motorized bionic legs will be used in sport and should be allowed, once they are sufficiently advanced to replace the Ossur Cheetah carbon fiber blades that are now the standard choice in Paralympic running.

To fully emulate the human leg will involve motors, the mechanical equivalent of muscles, and electrical sensors that gather the same input as the human nervous system. He envisions a sophisticated regime that sanctions certain limbs and settings for sporting events like the Olympics, where the goal is hardware and software that approximates, but will not surpass, the function of natural limbs. Off the field, all bets are off.

Herr is himself a double amputee because of adulthood injury. Ultimately he welcomes technology going beyond what nature intended, exploring the full range of possibilities in the human-machine interface.

"A thing like that would be in the domain of the Paralympics perhaps, or a new sporting activity that does not yet exist," he says.

It's easy to forget that sport is inherently unfair. Oscar Pistorius' existence now forces us to explicitly accept that reality -- now we see his carbon fiber legs, and even though we know they have inferior energy return to biological legs, their presence challenges us. They challenge us to accept imperfections in ourselves and each other.

Every "unadulterated" athlete has different biomechanical properties. Some have longer limbs, denser bones, slipperier tendons and double joints. The speed with which your body can clear the acid byproducts of metabolism and carry oxygen to your mitochondria are affected by cardiovascular training to be sure (confirmed), but there is a basic inequality set up by our very genetics.

In an 2008 NBC Sports promotional video, "Michael Phelps: Perfect Body," Bob Costas took this line of thought to an uncomfortable new level, describing the swimmer's physical features like his long upper body that forms a "sculpted V shape" and his "flat backside" as if he were a prize thoroughbred and praising his "superior genetics." The Olympics have always had this connection to body worship in a way, if only with fewer pan and zoom effects. Costas was in well-trod territory. At least our modern games are not performed in the nude.

But why should our natural physical differences get exclusive leeway when they provide an edge? Just because some of the most powerful factors, at the molecular level, are invisible or still remain to be discovered? What makes nature intrinsically alright, and what makes our technology and our willpower to overcome our nature, to repair and rehabilitate ourselves, invalidate our full return to society and to competition?

Sports represent so much more than a simple form of entertainment; it is a representation of our ideals as a society. Those ideals should include acceptance of the fact that that today, some human disabilities, when fought with enough ingenuity, teamwork, and passion, can become transformative.

I believe that the quality and duration of the human lifespan is itself an unnatural event. If we didn't allow Pistorius to compete for the highest stakes in the world's premier competitions, we shouldn't allow all the so-called normal athletes to compete who survived childhood thanks to immunizations and emergent appendectomies either. A severe infection at the age of 2 would have almost killed Michael Phelps were it not for the emergent medical treatment he received at the time. Tiger Woods hits his chip shots with the aid of laser eye surgery.

If Oscar Pistorius runs all the way to the London Olympics next summer, he will have endured his own Greek drama along the way. The implications of his 400-meter dash before the eyes of the world will reach beyond sport. The lessons his struggle carries for the rest of us may be just as universal as the ancient myths. Next year, we may celebrate a new kind of Icarus for a new human era, one whose escape flight succeeds thanks to better technology.

The opinions expressed in this commentary are solely those of Ford Vox.