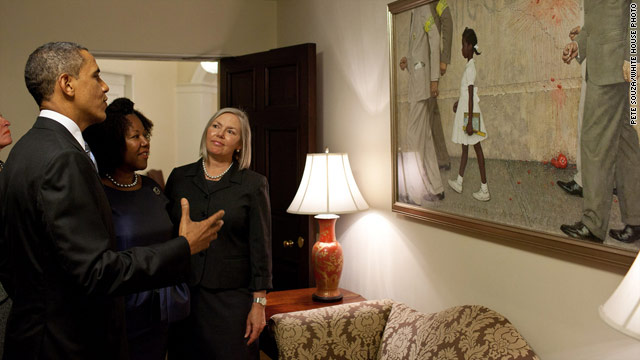 President Obama, Ruby Bridges and representatives from the Norman Rockwell Museum look at "The Problem We All Live With."
STORY HIGHLIGHTS

Editor's note: CNN Contributor Bob Greene is a bestselling author whose books include "Late Edition: A Love Story" and "Duty: A Father, His Son, and the Man Who Won the War."

Called "The Problem We All Live With," the painting, by Norman Rockwell, was based on the experience in 1960 of a 6-year-old New Orleans girl named Ruby Bridges who was trying to get to her elementary school. The courts had ordered that the school be integrated; certain elements of the community wished otherwise.

President Barack Obama personally approved the painting being displayed in the West Wing. Many reports about it have -- inaccurately -- stated that the painting first appeared on the cover of Look magazine in January of 1964.

Rockwell's painting appeared in Look that January, but not on the cover. No magazine would have risked that. The painting showed Ruby Bridges, in a white dress, carrying her schoolbooks, pencils and a ruler, while behind her the most vile of racial epithets-- the one routinely referred to today as "the n-word"-- is scrawled on a wall. A tomato has smashed against the wall; near one edge of the wall, the initials KKK can be seen.

Not visible in Rockwell's painting are the crowds taunting and threatening the child as she walks toward the school. She is accompanied by four men who tower over her -- two in front of her and two in back. They are deputy U.S. marshals.

Little Rock 9: 'It was a traumatic year'

Bridges is now 56 years old. She had hoped that Rockwell's painting would someday be given the honor of hanging in the White House, to commemorate those difficult American days. She visited the White House this summer to look at the painting with Obama. She told Politico: "I did feel if anyone would hang the painting, it would be him."

But the real test will be whether any future president will invite the painting back into the White House; it is scheduled to resume a tour with other Rockwell artwork this fall. Some commentators have said that Obama, who they believe usually downplays overt discussions of race because the historic nature of his presidency is self-evident, has taken an atypical step by displaying "The Problem We All Live With" so close to the Oval Office. It will be fitting and proper if generations of presidents who succeed him do the same thing.

Why? Because the message of the painting is so powerful that it goes well beyond the incident it portrays. The message transcends our usual Democrats-vs.-Republicans, conservatives-vs.-liberals, left-vs.-right squabbling.

Rockwell was a genius not just because of the technical skill of his artistry, but because of his eye for the telling detail. And in "The Problem We All Live With," the key detail is how he framed the four U.S. marshals who are accompanying that child to school. We do not see their faces; in the painting, the men are cropped at their shoulders.

That is the power and the story of the painting: Four men were accompanying Bridges to school, yes, but the point was, the United States of America was accompanying her. We see the men's "Deputy U.S. Marshal" armbands, and that is what matters. The painting tells us: This country may have its flaws, but when right and wrong are on the line, the nation, in the end, usually chooses to stand for right.

In 1957, during the battle over the integration of Central High School in Little Rock, Arkansas, it looked for a while as if the forces of jeering hatred would win. The governor of Arkansas even had the Arkansas National Guard keep the African-American boys and girls out of the school. The law of the land, as determined by the United States Supreme Court, mandated that integration should be implemented. But the law of the land was shoved aside.

Then President Dwight D. Eisenhower did something monumental: He sent in the 101st Airborne Division to ensure the safe passage of the boys and girls. Perhaps the people shouting and throwing rocks may have forgotten who they were dealing with. This was Ike, who had led the Allied invasion of Nazi-occupied Europe. Did the mobs screaming and cursing think that Eisenhower, and the United States which he was sworn to lead, were going to be intimidated by them?

The years that have followed those tumultuous Civil Rights days have been far from perfect. There are sad times when it can seem as if the grandeur of the struggle may have been the high point, when flare-ups of ugliness and urban violence and despair threaten to do a disservice to the ideals that started it all.

But the grandeur was real; the ideals were genuine and worthy. Which is why Rockwell's "The Problem We All Live With" belongs in the White House not just while Barack Obama is in office, but in centuries still to come.

That is the United States in that painting, choosing the side of justice. Which is a message that can never be stated too often. It is the glory we all live with.