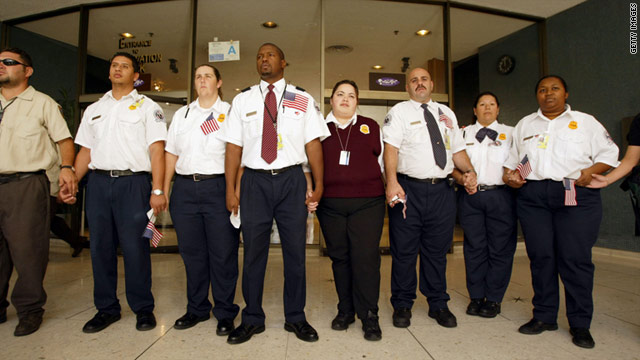 TSA employees hold hands around a memorial to the victims of the September 11 terror attacks at Los Angeles International Airport in 2003.
STORY HIGHLIGHTS

Washington (CNN) -- About 8 o'clock on the night of September 11, 2001, President Bush's staff received word. The president had returned to Washington. The White House had reopened.

The walk back to the White House from temporary staff quarters in a borrowed office building remains one of my most vivid recollections of that terrible day.

The streets of Washington were ghostly empty. Armed troops and military vehicles stood sentry at intersections leading to the White House. Yet the night was still and lovely. The buildings were brightly illuminated. The flags still flew at full height: only the next day would they be lowered to half-staff.

That first night, the strength seemed to surge around us. These buildings, now empty, would next day be filled with purpose: mobilizing the vast resources of the nation for the struggle ahead.

Who could doubt America would be fully equal to all that lay ahead?

Flash forward a decade, and the mood has thickened into gloom.

Somebody's got to win the 2012 election, but only because the rules do not permit the voters to reject all the candidates at the same time. The Republican brand polls as badly as the Democratic brand. Congress' approval rating has slumped even below the president's.

One classic swing voter in a McInturff focus group -- a middle-aged, working-class, white woman from Florida -- declared her utter disgust with everyone and everything: "I won't even put up my flag any more, it's just the way I feel."

Much of American politics today is an argument about how the United States tumbled from where it was 10 years ago to where it is today. Maybe the poignant anniversary of the terrorist attacks could launch a more productive debate: how does the United States recover the confident strength and power that once consoled a country for its loss and pain?