How 9/11 began the decline in our democracy

By Vincent Warren, Special to CNN 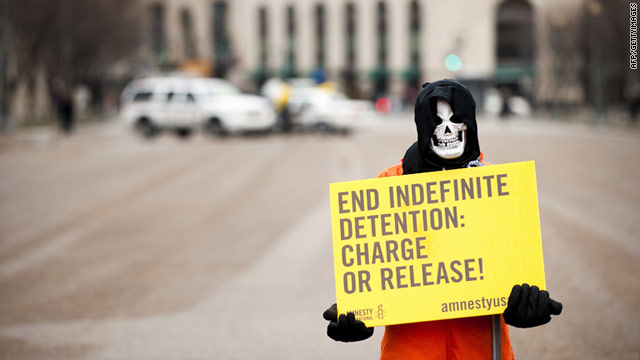 A demonstrator with Witness Against Torture stands near the White House protesting the Guantanamo Bay detention camp.
STORY HIGHLIGHTS

Editor's note: Vincent Warren is executive director of the Center for Constitutional Rights. The Center represented Maher Arar in his 2005 civil suit against the United States. Its dismissal by a district court in Brooklyn was upheld on appeal, and last year the Supreme Court declined to hear the case.

(CNN) -- A year after the attacks of 9/11, Maher Arar, a Syrian-born Canadian, was detained during a layover at JFK on his way home to Ottawa. He was held in solitary confinement for two weeks, interrogated and denied access to lawyers.

The Bush administration labeled him al Qaeda, and rather than send him home to Canada, they sent him to Syria, a country known for using torture. There, over the course of a year's confinement in a cell he describes as the size of a grave, he was repeatedly interrogated and tortured.

He was never charged and never tried. After a year, the Syrians released him and publicly stated he had done nothing wrong. Later, the Canadian government apologized and awarded him more than $9 million in compensation.

Around the same time in and around New York, immigrant men from countries ranging from Turkey to India were being swept up on minor immigration violations and detained for months on end, even after they were cleared of any connection to terrorism. They were sometimes held in solitary confinement. They were not permitted to reach out to family or friends or lawyers, and some were subjected to physical and verbal abuse and forbidden to practice their religion.

How did this happen? How did a nation that prides itself on being the world's greatest constitutional democracy become one that sends innocent people to be tortured or indefinitely detains and abuses immigrants who committed no crime?

September 11 was tragic in many ways, and it marked the beginning of the greatest decline in democracy in our country since the Japanese internment during World War II and the Red Scare of the 1950s.

It was the day we began to let fear erode our belief in our own system of government, with all its checks and balances and laws and treaties. Playing on that fear, our government began to operate outside the law and in the process destroyed many more lives than those lost in the attack.

Let us list some of the more egregious ways our most cherished protections were swept aside:

Our government engaged in surveillance of citizens, spying without the court approval required by law. For example, in March 2010 a federal judge found that the government under the Bush administration had violated a federal statute when in 2004 it wiretapped Al Haramain, a now-defunct charity organization in Oregon, along with two of its lawyers.

The Bush administration did more than that, though. Shortly after 9/11 it authorized the National Security Agency to eavesdrop, without a warrant, on the telephone calls and other electronic communications of millions of Americans, most of whom were suspected of no crime.

It tortured in our name. Arar's rendition to Syria (and the secret renditions of others) proves that the United States tortures or hires others to torture on its behalf. The United States sent prisoners to these places --Egypt is another -- with the knowledge that they were places known for torture and other human rights abuses.

Additional proof, if it's needed, of what is tolerated in this new America can be found in the horrifyingly graphic photographs, revealed to the world in 2004, documenting prisoner abuse at the Abu Ghraib detention center. Since the publication of those photos, the government has admitted to other instances of torture, most notably at the American detention center at Guantanamo Bay.

Even today, under the guidance of the president who promised change, the U.S. government continues to imprison people for years without trial or due process.

After 9/11, President Bush threw due process out the window, holding prisoners at Guantanamo without charging them and subjecting some of them to unfair military tribunals. President Obama has extended these illegal and unjust aspects of Bush's Guantanamo approach. Earlier this year, he signed an executive order creating a formal system of indefinite detention at Guantanamo and starting new military tribunals for detainees there.

Our government created and continues to defend vague and far-reaching laws. It made dissent, a basic right protected by the First Amendment, into a criminal act, going so far in one 2005 case as to monitor a group gathering at a Quaker meeting house in Florida to plan anti-war protests.

It subcontracted our interrogations and other military duties to private corporations with little accountability for their actions.

It hid detainees at Abu Ghraib in violation of international and domestic law and kept them hidden from the Red Cross.

And it created, at Guantanamo Bay, a legal black hole that has become a worldwide symbol of the way our country has turned its back on human rights and the law.

At the Center for Constitutional Rights, we see the faces of these new victims every day. Our clients are men and women who have been caught up in unlawful sweeps, racially profiled, sold for bounties in distant villages. They have been held indefinitely, tortured, abused.

Their lives were destroyed because too many times they were "the Other" and did not deserve our respect or even our protections.

But democracy is the presumption of innocence. The right to due process. The body of laws and international agreements that have been carefully built up (and fought for) over centuries to protect all people from arbitrary authority and persecution.

Maybe it's time to admit we lost our way and start on a new path.

The opinions expressed in this commentary are solely those of Vince Warren.