By Mike Milhaven, Special to CNN 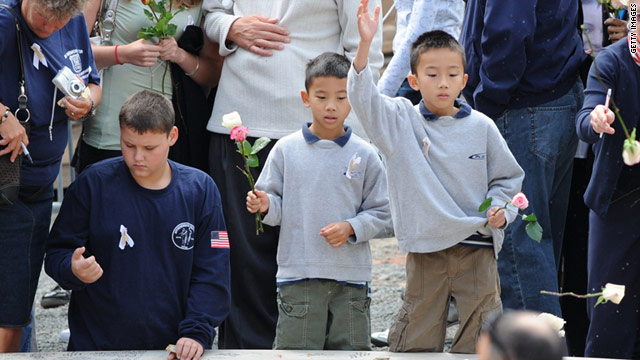 (CNN) -- Our neighbors have a dog. I'm not sure what breed it is, but it's big and barks a lot. I don't pay it much attention, but my kids are scared of it. Once the dog was allowed outside the yard, and it knocked my daughter over. She wasn't hurt, but the memory has never left her, and to this day she gives the dog and the neighbor's yard a wide berth.

As a parent, one of my responsibilities is to protect my children. Protect them from getting sick. From the monsters in their closet, from the big noisy dog next door. But try as I might, the one thing I will not be able to protect them from much longer is the reality of the world in which we live.

You see, my twins are 9 and, so far, have no idea about what happened on September 11, 2001. Images many of us will never be able to forget, they have never seen. Planes flying into buildings. Towers on fire then crumbling to the ground. People in the streets, running for their lives. Heroic airline passengers taking matters into their own hands and paying the ultimate price to save others.

As they prepare to enter fourth grade, and as the 10th anniversary of that horrible day approaches, my wife and I are struggling with how to tell them about what happened.

Our goal had never been to hide the truth. Far from it: We want to be the ones who first tell them about 9/11.

How do educators teach kids about 9/11?

We were waiting for the right time to bring it up in a comfortable setting where we could discuss it with them and answer their questions. But how do you make a conversation about the worst tragedy in American history "comfortable?" And once they start asking questions about what happened, who knows where the conversation will go?

How do you even begin to explain to a 9-year-old what a terrorist is? That there are people out there willing to kill you just because you don't think the way they do or believe what they believe. And once we explain that, how do we explain that this does not reflect the beliefs of all of the people in the countries where those bad people came from?

Will we have all the answers to their questions? To this day, even I still ask, "Why?"

We came close to telling them at the end of the last school year. Our daughter came home and told us about a project her class was assigned. Student were to choose a country, research it and then present what they learned to the class.

"That's wonderful. What country did you choose?," my wife asked her.

Nine years old, and my daughter wanted to research Afghanistan. Not France or China or Peru like the other kids in the class. But she actually had a good reason.

We are friends with a couple who have a young daughter. The father is a major with the Army Rangers and was recently deployed to Afghanistan. During his tour there, we heard the stories of how difficult it was for the little girl to have her daddy be gone for so long. We learned about how she would talk to her daddy using Skype. We read the blog her mommy created for her daddy, detailing everything his wife and daughter were doing every day that he was gone.

When my kids would ask, "Why is her daddy in Afghanistan?" we would answer, "Well, he's in the Army. And they're in Afghanistan to help." A very vague answer to be sure. But for a 9-year-old, it was enough.

That is why my daughter wanted to research Afghanistan. Not just to learn about its language, food and culture, but also its history. It's hard to talk about Afghanistan's history without explaining why her friend's daddy and a huge portion of the U.S. military are there. My wife and I wrestled with how to explain terrorism, Islamic extremism and what kind of person would think of flying planes into buildings.

How do you explain that to children in a way where they aren't terrified to go outside? Selfishly, part of me doesn't want to tell them any of this. I fear that once they learn, it will be a big step away from their childhood. Part of me is also jealous that they don't know the fear and the anger and pain that we all feel as a result of that day.

As part of another project, my son was asked to define "kindness." His definition: "Kindness is having an open mind and an open heart." That's what we want for our children. That when they are faced with something new or different that they face it with an open mind and an open heart. They don't have to agree with a person or believe what that person believes, but they should be able to respect the beliefs of others.

The hard reality is that Mommy and Daddy can not protect them from everything. But we want to be the ones who will give them the tools to be able to go out into this world of ours and be the best they can be. We want to be the one to answer their questions and to comfort them if they are scared.

My wife and I will surely tell our kids soon about what happened on 9/11. But for a little while longer we want them to be able to live in a world where those towers are still standing, where a blue September sky doesn't send a chill down your back and where the scariest thing they have to worry about is the big, noisy dog next door.

The opinions expressed in this commentary are solely those of Mike Milhaven.