How 'war on terror' unleashed a war on journalists

By Joel Simon, Special to CNN 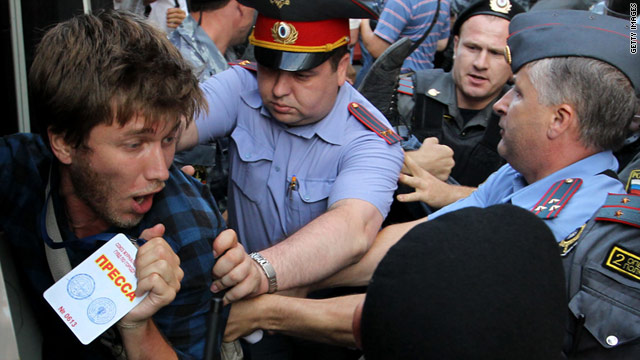 A young man shows his press ID as Russian police detain him at a protest in Moscow on July 31.
STORY HIGHLIGHTS

(CNN) -- In the days following the 9/11 attacks, Attorney General John Ashcroft asserted that criticism of the Bush administration "only aids terrorists" and "gives ammunition to America's enemies." White House Press Secretary Ari Fleischer warned that "all Americans ... need to watch what they say, watch what they do." Meanwhile, Secretary of State Condoleezza Rice told television executives they should not air videos from Osama bin Laden because these could contain coded messages.

These statements sparked widespread concern in U.S. media circles about looming restrictions on local media. While there have been no sweeping legislative attacks on the First Amendment, press freedom has eroded domestically and globally.

President Obama's record as a zealous classifier of government documents has institutionalized increased official secrecy. Legal efforts to compel journalists to reveal confidential sources are prevalent, and without a federal shield law, journalists facing a federal subpoena confront the prospect of jail. Similarly, the U.S. Justice Department has sought to imprison government employees for leaking classified information to the media. In its operations in Iraq and Afghanistan, the U.S. military has detained journalists without charge for long periods, and failed to adequately investigate our documentation of the killings of 16 journalists by U.S. forces' fire. The killings, however, did not appear to be deliberate attacks on the media.

But whatever damage was done to press freedom domestically pales in comparison to the devastating impact of U.S. post-9/11 policies on press freedom around the world.

Anti-state charges and "terrorist" labels have become commonplace and are used to unduly intimidate, detain and imprison journalists. Media blackouts and limited access to war and conflict zones have become routine, along with the uninvestigated killings of journalists.

To put it starkly, 81 journalists were in jail around the world at the end of 2000. By the end of 2001, that number shot up to 118. Today there are 145, most held on state security charges. Abusive use of national security was the single greatest charge invoked to justify journalist imprisonments in 2010, the Committee to Protect Journalists found.

In fact, a good part of the increase in the last decade is directly attributable to the policies and rhetoric employed in the aftermath of 9/11, which were eagerly adopted by repressive governments around the world.

The policies and rhetoric employed in the aftermath of 9/11 ... were eagerly adopted by repressive governments around the world.
--Joel Simon

Change in Pakistan since 9/11

In Central Asia, despotic regimes used their new strategic importance in the war on terrorism to escalate their own wars on dissidents, bundling them with the media. Since 2001, anti-terrorist rhetoric has become deeply entrenched in Uzbekistan, Kyrgyzstan, and Kazakhstan. It is also a term of art in Russia, where authorities routinely use the threat of terrorism to justify repressive policies in the North Caucasus, including limits on the press.

Pakistan, of course, has leveraged its critical value as an ostensible U.S. ally in the war on terror to justify the free hand given to the country's brutal spy agency, which has been accused of involvement in the murder of several probing journalists.

In the troubled Horn of Africa region, Ethiopia's relative stability is largely maintained by repression of dissent and ever-increasing restrictions on the press. Since 9/11, the country has been active in U.S. counterterrorism in Somalia, but for Ethiopian journalists, reporting on terrorism without risking jail time has become too perilous. Africa's second leading jailer of journalists and notorious Internet censor routinely employs anti-terrorism laws to suppress information and accuse journalists of providing rebel groups with a platform.

Accusations are not leveled exclusively at local journalists, as seen with the July detention of two Swedish journalists who were reporting on armed separatists. They and two local journalists held incommunicado since June, have just been charged with terrorism. Previously, the government has waged similar accusations against the Kenya-based broadcaster Nation Television (NTV) and against Al-Jazeera. In 2007, three New York Times journalists were detained for similar reporting.

In Latin America, drug traffickers were re-branded as "narco-terrorists," first by former Colombian President Alvaro Uribe, and more recently in Mexico. This repositioning allowed governments in both countries to portray their efforts to crush the cartels as part of a global anti-terror campaign, with explicit calls to the press to join the program. Uribe even labeled his critics in the media "terrorists." There are documented cases of journalists being detained, harassed and beaten by soldiers on patrol.

Over the past five years, Yemen, which has instituted a near-total blackout on media reporting from the war-afflicted Saada region, has also silenced news and opinion on the basis of anti-terrorism. Reporting and opinions on Yemen's counterterrorism efforts customarily result in questioning, intimidation and detention by security forces, as in the case of prominent journalist Abdulelah Shaea, whose reporting on al Qaeda landed him in prison. In Syria, CPJ research shows, at least 11 journalistic bloggers have been found guilty of anti-state crimes under the emergency law in recent years.

Anti-terrorist rhetoric continues to provide political cover for anti-press policies around the world, yet the actions of the U.S. military in Afghanistan and Iraq have also changed the ways the wars are covered.

Although the embedding program that allows journalists to accompany the U.S. military has provided new opportunities for coverage, it has also created a dichotomy between embedded and "unilateral" journalists, whom U.S. forces have often viewed with grave suspicion.

More than a dozen journalists have been detained by the U.S. military in Iraq and Afghanistan and held for extended periods without charge or due process, according to CPJ research. Al Jazeera correspondent Sami Al Haj was held for more than six years as a prisoner at Guantanamo and never charged with a crime. The U.S. also bombed Al Jazeera offices in both Kabul and Baghdad, leading to the death of one reporter.

These actions sent a powerful message to militaries around the world that an embedded journalist is the only acceptable way to cover their activities .The Israeli military, for example, denied the media access during their 2008 Gaza invasion. Journalists were mostly forced to cover that event from inside Israel.

The Sri Lankan government used the same approach during its brutal final offensive against Tamil separatists in 2009. The absence of any independent media gave government forces a free hand, which they used to carry out massive human rights abuses including indiscriminate fire that killed thousands of civilians.

The global fallout from 9/11 is a stark reminder that while the U.S. failure to uphold democratic standards has obvious implications domestically, the greatest long-term impact is likely to be in the many places where governments are always seeking justifications for unrelenting repression.

Ten years on, it's clear that the anti-terror rhetoric and policies developed by the United States after 9/11 have provided effective and enduring cover for the erosion of civil liberties around the world -- including press freedom.

The opinions expressed in this commentary are solely those of Joel Simon.