Biden: U.S. willing to stay in Afghanistan beyond 2014 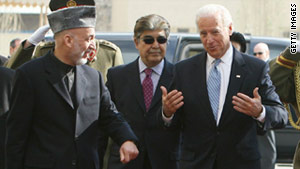 (CNN) -- U.S. troops will stay in Afghanistan beyond 2014 if Afghans want them to, Vice President Joe Biden said Tuesday.

President Barack Obama has announced plans to begin withdrawing some troops from Afghanistan this July, with all U.S. combat troops scheduled to be out of Afghanistan by 2014.

The United States does not intend "to govern or nation-build" as that "is the responsibility of the Afghan people and they are fully capable of it," Biden said Tuesday, according to a journalist traveling with him.

Biden's comments Tuesday come a month after he told NBC's "Meet the Press" that the United States would be "totally out" of Afghanistan by 2014 "come hell or high water."

In November, at a conference in Lisbon, Portugal, NATO Secretary General Anders Fogh Rasmussen signed a long-term partnership agreement with Afghan President Hamid Karzai under which "NATO will stay as long as necessary to support Afghanistan until it can no longer become a safe haven for terrorism."

In the interview with "Meet the Press," Biden drew comparisons to the U.S. military's presence in Iraq. He noted that the United States had followed through on an agreement with Iraq to withdraw combat troops from cities, then elsewhere. Simultaneous to the troop withdrawals, the U.S. helped strengthen Iraq's government and transferred more responsibility for security to Iraqi forces.

"That's exactly what we did at the recent Lisbon conference, the NATO conference, where we said, 'We're starting this process, just like we did in Iraq,' " Biden said. "'We're starting it in July of 2011, and we're going to be totally out of there come hell or high water by 2014."