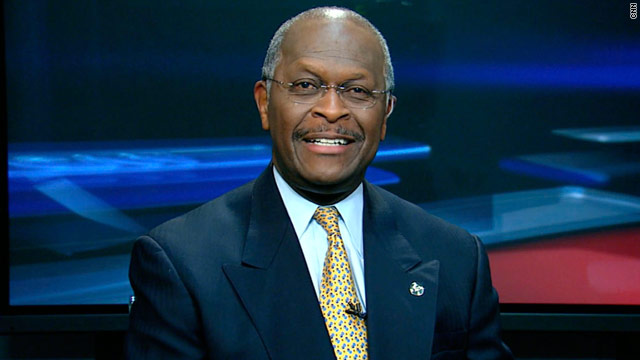 Washington (CNN) -- He does not have the megawatt celebrity status of Sarah Palin, but he doesn't have the political baggage, either.

Nor does he have as much money in his political action committee as that of other potential presidential candidates. In fact, if you mention his name in many circles, the response may be, "Who is that?"

Herman Cain is a conservative African-American Republican who's a radio talk show host based in Atlanta. He might be the first to announce that he's running for the 2012 GOP presidential nomination.

Cain, who's fond of getting laughs by calling himself the "dark horse" in the presidential guessing game, announced Wednesday that he's forming a presidential exploratory committee. In an interview with CNN, Cain explained his intentions.

"We have taken the step of hiring some key staff already such that, when I am in the exploratory phase, I will be able to really make a good assessment of whether I can get the nomination and ultimately go on to win the presidency," he said.

He added, "So in fact, establishing the exploratory committee is one of the main vehicles in which you can go out and start to raise funds."

Cain's resume is impressive: CEO and president of Godfather's Pizza for 10 years, former chairman of the board of the National Restaurant Association, and he currently sits on the boards of directors of A-list companies like Hallmark Cards, Whirlpool and AGCO, one of the largest manufacturers of agricultural equipment.

Cain is a favorite in many Tea Party circles, and he staunchly defends that movement against claims of racism.

Though he may be well-known in conservative corridors and the halls of corporate America, some suggest Cain has slim to no chance of winning a presidential race.

Cain has never held elective office. He ran in the 2004 GOP primary for one of Georgia's U.S. Senate seats but lost.

But Grant said that Cain's chances have improved because of forces, like the Tea Party, helping to defeat GOP establishment picks.

Cain told CNN that low assessments of his chances miss the mark.

Cain calls potential Republican presidential candidates -- like Palin, Mitt Romney and Newt Gingrich -- "the usual suspects." He said that "those are the ones that get early attention from the media."

But what does he think of, potentially, running for president against Palin?

Cain said he has no idea if Palin will run, though he did call her a "very effective voice for conservatives in this country." And he did explain how they would contrast if he did run against her.

"The way I would differentiate myself from Sarah Palin in a primary campaign would be my business problem-solving experience," he said.

Cain explained that if he did run, he'd push for an "across-the-board cut of all the federal agencies" to reduce spending and that he'd push to modernize or "restructure" entitlement programs such as Medicaid, veterans' benefits and Social Security.

But he lets loose on the newly passed health care law.

Cain, a survivor of stage-four cancer, reiterated to CNN what he's publicly said before: If the health care law had been fully implemented in 2006, when he was diagnosed, it would have killed him. Cain goes even further, saying that some people will die as a result of the law's implementation.

That claim -- vehemently denied by Democrats and supporters of the health care law -- is partly what makes Cain a favorite in Tea Party circles. Grant, who followed Cain's 2004 Senate bid, said that Cain has a loyal following of mostly white conservatives. But Grant said that may come with costs.

"One thing I can tell you about, the last time, when he ran for Senate in Georgia ... I've never seen another African-American in the audience," Grant said.

"He has not connected well with an African-American base."