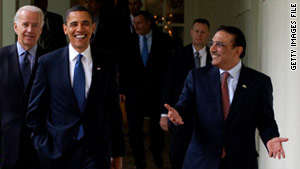 Their discussion focused on fighting terrorism and "the importance of cooperating toward a peaceful and stable outcome in Afghanistan," the White House said in a statement.

"The President underscored the importance of the U.S.-Pakistan relationship and our continued support for Pakistan," it said.

Zardari is in Washington to attend a memorial service Friday for diplomat Richard Holbrooke, who was Obama's envoy in Pakistan and Afghanistan. Holbrooke died last month.