Report: Women should be allowed to serve in combat 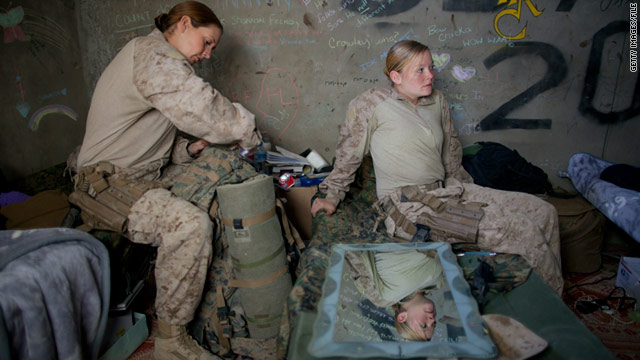 A commission's draft report said restricting women from combat is out of touch with the demands of modern warfare.
STORY HIGHLIGHTS

Washington (CNN) -- A Pentagon commission on diversity is recommending the U.S. military end its ban on women serving in direct combat roles -- a restriction the group says is discriminatory and out of touch with the demands of modern warfare.

In its draft report, the Military Leadership Diversity Commission said the military should gradually eliminate the ban in order to create a "level playing field for all qualified service members."

The commission, comprised of senior military officers, businessmen and academics, must now release a final report. Its findings would then need to be sent to Congress and President Obama before any changes to policy would be implemented.

The draft report said the military's "combat exclusion policies" do not reflect the realities of the current wars in Iraq and Afghanistan and create institutional barriers to women, who are prevented from getting key assignments that could lead to career advancement.

"Service policies that bar women from gaining entry to certain combat-related career fields, specialties, units, and assignments are based on standards of conventional warfare, with well-defined, linear battlefields," the report said. "However, the current conflicts in Iraq and Afghanistan have been anything but conventional."

More than 200,000 women have served in the U.S. military in Iraq and Afghanistan. Since those wars began, 132 female service members have been killed, and 721 have been wounded.

Proponents of the commission's recommendations agree that technology and circumstance have drastically altered modern warfare. They say it is difficult to distinguish between combat and non-combat roles on the front lines of the wars in Iraq and Afghanistan.

Adm. Mike Mullen, chairman of the Joint Chiefs of Staff, described women's changing wartime role in a speech in November, saying: "I know what the law says, and I know what it requires. But I'd be hard pressed to say that any woman who serves in Afghanistan today, or who served in Iraq over the last few years, did so without facing the risks of their male counterparts.

"In a war where there is no longer a clear delineation between the front lines ... and the sidelines ... where the war can grab you anywhere, this will be the first generation of veterans where large segments of women returning will have been exposed to some form of combat," Mullen said.

National Organization for Women President Terry O'Neill said she is "thrilled" by the commission's recommendations because the ban is "completely unfair to women who are already risking their lives for their country."

"Since 1990 [NOW] has been calling for fair treatment of women in the military who are in fact at risk but are not getting combat pay or opportunities for promotion," O'Neill said.

The commission also dismissed concerns that allowing women to serve in combat units would negatively impact troop morale, saying there is little evidence to support the theory.

"One frequently-cited argument in favor of the current policy is that having women serving in direct combat will hamper mission effectiveness by hurting unit morale and cohesion. Comparable arguments were made with respect to racial integration, but were ultimately never borne out," the report said.

Established by Congress in 2009, the Military Leadership Diversity Commission was tasked with assessing opportunities for the promotion and advancement of minority members of the military.

CNN's Barbara Starr and Charley Keyes contributed to this report.