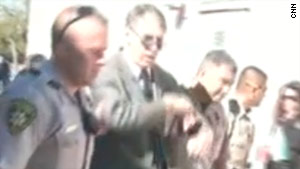 James Fuller, center, was involuntarily committed to a mental health facility after the incident.
STORY HIGHLIGHTS

Dorothy DeRuyter, a companion of Fuller's, provided CNN with a statement.

"I would like to tender my sincerest apologies to Mr. (Trent) Humphries for my misplaced outrage on Saturday at the St. Odelia's town meeting," Fuller said in the statement. "It was not in the spirit of our allegiance and warm feelings to each other as citizens of our great country."

Fuller, 63, was involuntarily committed to a county mental health facility after he photographed Tucson Tea Party founder Humphries and said, "You are dead" when Humphries began speaking at the event.

Fuller "is apologetic and very sad" about his outburst, DeRuyter said. "He wishes he could go back and do things differently," she said.

"I was asked to give my thoughts on gun control laws and perhaps the passage of new laws," Humphries said of the incident. "I said something to the effect that although gun rights and laws are not necessarily the primary focus of the Tucson Tea Party, our community needs to be given the opportunity to allow some time to pass and people to heal before we start this type of political dialogue."

Fuller, one of 13 people wounded in the January 8 shooting that left six people dead and Rep. Gabrielle Giffords in critical condition, is a disabled veteran and former volunteer for Giffords' campaign.

Giffords is still hospitalized, but her condition has been improved to serious.

Fuller, who was shot in the knee, had been very vocal since the incident, blaming rhetoric from the right for the shooting. Jared Loughner, 22, has been charged in the shooting, but no evidence has been found that could link a motive to incendiary rhetoric.