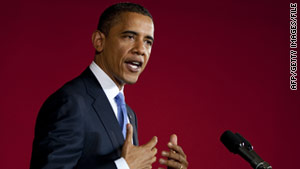 Washington (CNN) -- President Barack Obama's State of the Union speech will emphasize "winning the future" for America by strengthening the nation's ability to compete in a changing world, according to White House talking points provided Monday by a Democratic source.

Tuesday night's annual speech to Congress, a nationally televised event considered the president's biggest address of the year, brings together the three branches of government for an assessment of where America stands and where it is heading.

"The president will lay out a plan to win the future by out-innovating, out-educating and out-building the rest of the world," said the White House talking points. "He will talk about the need to take responsibility for our deficits, by investing only in what makes America stronger and cutting what doesn't, and reforming our government so that it's leaner and smarter for the 21st century."

This year's State of the Union, Obama's second, comes after his Democratic Party lost its House majority and had its Senate majority decreased in the November elections.

Now facing a divided Congress after two years of Democratic control, Obama has signaled a shift to the political center intended to ease the partisan divide in Washington and win back some of the independent support that helped elect him in 2008.

Republicans, however, doubt Obama will change from what they characterize as a big government ideology.

They call for immediate and significant spending cuts to address growing federal debt and already have challenged Obama's expected push for increased spending in areas the president considers vital for future growth.

"Any time they want to spend, they call it investment," Senate Minority Leader Mitch McConnell, R-Kentucky, told "Fox News Sunday," adding: "We'll take a look at his recommendations, we always do. But this is not a time to be looking at pumping up government spending in many areas."

However, signs of disunity on the right between Tea Party conservatives seeking extreme spending cuts and more moderate Republicans are evident, so much so that there will be two GOP responses to the State of the Union.

White House Press Secretary Robert Gibbs insisted Monday that Obama is ready to tackle the federal deficit and spending issues cited by Republicans while maintaining the ability of the United States to grow and compete globally.

The White House talking points sought to balance the need for deficit reduction and keeping America competitive by investing in education, clean energy, infrastructure and other areas necessary for growth.

"The most important contest we face today is not between Democrats and Republicans," the document said. "It's America's contest with competitors across the globe for the jobs and industries of our time. It's about winning the future."

Obama will emphasize the nation's improved economic conditions today compared with when he took office, but also acknowledge continued high unemployment and stagnant or shrinking wages that need to be addressed, according to the document.

In addition, the talking points said Obama "will discuss how we can continue to keep America safe and advance our interests around the world."

State of the Union address preview

"We face big challenges, and fixing them will require a lot of hard work and sacrifice from everyone -- Democrats, Republicans and independents," the document continued. "But if we're willing to come together and find common ground on these issues, then we can win the future."

The speech is one of the major Washington events of the year, full of political pageantry that includes Obama's formal introduction by the House sergeant at arms. Military generals, Supreme Court justices and other luminaries attend.

This year's speech, less than three weeks after a shooting spree in Tucson, Arizona, killed six people and critically injured Rep. Gabrielle Giffords, D-Arizona, will reflect the aftereffects of the tragedy.

Special guests joining first lady Michelle Obama for the speech will include Daniel Hernandez, the legislative intern who aided Giffords after she was shot; the family of 9-year-old shooting victim Christina Taylor Green, and Dr. Peter Rhee, the trauma chief at University Medical Center where Giffords was treated.

In a symbol of desired political civility in the aftermath of the shootings, more than two dozen legislators have agreed to break the traditional segregated party seating and join members of the other party across the political aisle.

The aisle-crossers will include Republican Rep. Joe Wilson of South Carolina, who previously shouted "you lie" at Obama during a speech to Congress on health care reform. Wilson later apologized for his outburst and was formally rebuked by the House.

Obama outlined his State of the Union intentions with a weekend videotaped message to supporters that said the speech will focus on "making sure that we are competitive, that we are growing, and we are creating jobs not just now but well into the future."

An essay by Obama on the optimistic spirit of former Republican President Ronald Reagan, published Monday by USA Today, also might have foreshadowed some of his message in the State of the Union.

"It was a spirit that transcended the most heated political arguments, and one that called each of us to believe that tomorrow will be better than today," Obama wrote of Reagan. "At a time when our nation was going through an extremely difficult period, with economic hardship at home and very real threats beyond our borders, it was this positive outlook, this sense of pride, that the American people needed more than anything."

CNN's Jessica Yellin and Tom Cohen contributed to this story