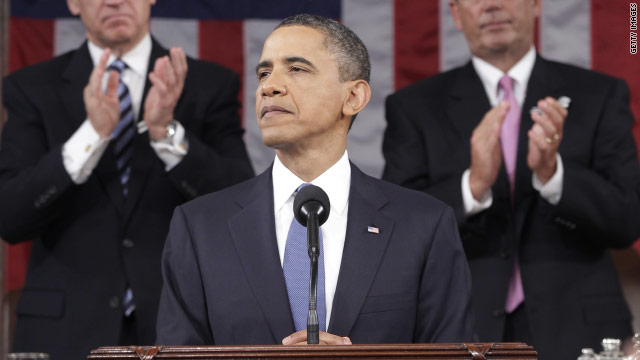 Washington (CNN) -- America is heading in the right direction and now needs to reshape some priorities to ensure future strength and stability, President Barack Obama told the nation Tuesday in his second State of the Union address.

Sounding themes of optimism and pragmatism in his 61-minute speech, Obama called for increasing investments in key areas such as education and clean energy while freezing some government spending for five years in an attempt to address simultaneous needs for economic growth and fiscal balance.

"We know what it takes to compete for the jobs and industries of our time," Obama said to applause. "We need to out-innovate, out-educate and out-build the rest of the world. We have to make America the best place on Earth to do business. We need to take responsibility for our deficit and reform our government. That's how our people will prosper. That's how we'll win the future."

Obama heads to Wisconsin on Wednesday to highlight growing opportunities in clean energy, an example of the kind of innovation investment he championed Tuesday night.

The annual speech to both chambers of Congress and all three branches of government, a night of political pageantry and symbolism, presented a new political reality.

Gallery: State of the Union address

Republicans now control the House and hold a stronger Senate minority after the November elections, with new GOP House Speaker John Boehner sitting behind Obama as he spoke, unlike last year when Democrat Nancy Pelosi occupied the speaker's chair.

Obama acknowledged the new order by calling for both parties to work together in the national interest instead of adhering to purely partisan ideology.

"New laws will only pass with support from Democrats and Republicans," Obama said. "We will move forward together or not at all -- for the challenges we face are bigger than party and bigger than politics."

At the same time, the speech opened the great Washington spending debate of 2011.

Obama and Democrats seek to build on the government-bolstering agenda launched with the president's election in 2008, while Republicans call for deep spending cuts to reduce the size and scope of government.

"On this current path, when my three children -- who are now 6, 7 and 8 years old -- are raising their own children, the federal government will double in size, and so will the taxes they pay," Republican Rep. Paul Ryan of Wisconsin said in the formal GOP response. "No economy can sustain such high levels of debt and taxation."

In an unusual move, another Republican House member -- Rep. Michele Bachmann of Minnesota -- also delivered a post-speech response on behalf of the Tea Party movement that energized conservative voters in November.

Bachmann, who is believed to be considering a presidential run in 2012, called for Obama to support a balanced budget amendment, repeal health care reform law, shrink the government and adopt other positions favored by Tea Party conservatives. She also thanked Tea Party supporters for "voting out the big-spending politicians" last November, saying "we're just beginning to start to undo the damage" of the last few years.

"While the president is leading, the GOP is slashing," Weiner said in a statement, adding that Obama's values "are right on, and now it's time to stand up for them."

Facing a divided Congress, a still-recovering economy and critics who say he has failed to adequately stress job creation in the past, Obama presented a framework of proposals that emphasized forward progress while acknowledging -- but stopping short of detailed solutions for -- the stickiest issues of long-term fiscal stability, such as possible reforms of Social Security and other costly entitlement programs.

Aides said further details would come in the administration's budget proposal in mid-February and described Obama's approach as a realistic program that bolsters existing progress instead of what one official called the "meat-ax" Republican approach to "eviscerate" government.

In the speech, Obama cited continuing recovery from the economic recession and progress on other fronts, renewing his pledge to have all fighting forces out of Iraq by the end of 2011 and some coming home from Afghanistan starting in July.

"We are poised for progress," Obama said. "Two years after the worst recession most of us have ever known, the stock market has come roaring back. Corporate profits are up. The economy is growing again. But we have never measured progress by these yardsticks alone."

More needs to be done to set up the United States as a leading competitor in the global marketplace this century, Obama said. He called for more spending to bring the nation's research and development to its highest level as a share of the economy since the Kennedy administration 50 years ago.

By investing in better research and education, Obama noted, America can lead the world in the same way its investments half a century ago brought the first lunar landing after the Soviet satellite Sputnik had beaten the United States into space.

"After investing in better research and education, we didn't just surpass the Soviets; we unleashed a wave of innovation that created new industries and millions of new jobs," Obama said. "This is our generation's Sputnik moment."

Obama also called for revamping education policy and adding 100,000 more math, science, technology and engineering teachers by the end of the decade; extending wireless Internet coverage to 98 percent of the population, and having 80 percent of the nation's electricity coming from clean energy sources by 2035 and 1 million electric vehicles on the road by 2015.

"Some folks want wind and solar," Obama said of the clean energy goal. "Others want nuclear, clean coal and natural gas. To meet this goal, we will need them all -- and I urge Democrats and Republicans to work together to make it happen."

"Now that the worst of the recession is over, we have to confront the fact that our government spends more than it takes in," Obama said to applause from members of both parties. "That is not sustainable. Every day, families sacrifice to live within their means. They deserve a government that does the same."

Administration officials said Tuesday that the five-year discretionary spending freeze would amount to a savings of $400 billion over 10 years and would put domestic spending in 2015 at its lowest level as a percentage of the overall economy since the Eisenhower administration.

"This freeze will require painful cuts," Obama said, adding that some in Congress have already proposed deeper cuts, "and I'm willing to eliminate whatever we can honestly afford to do without. But let's make sure we're not doing it on the backs of our most vulnerable citizens."

GOP responds to State of the Union

Bachmann responds to State of the Union

How well did Obama perform in speech?
RELATED TOPICS

Obama also expressed a willingness to revise the controversial health care reform bill passed by Congress last year, which Republicans are already trying to repeal or undermine at every turn.

"We can start right now" by revising bookkeeping regulations in the law that have "placed an unnecessary burden on small businesses," Obama said, adding: "What I'm not willing to do is go back to the days when insurance companies could deny someone coverage because of a pre-existing condition."

With emphasis, he added to applause from Democrats: "So I say to this chamber tonight, instead of re-fighting the battles of the last two years, let's fix what needs fixing and let's move forward."

On other issues, Obama said his administration "will develop a proposal to merge, consolidate and reorganize the federal government in a way that best serves the goal of a more competitive America," urged Congress to work with him on immigration reform and asked for increased spending for building and repairing roads and bridges to provide needed construction jobs.

Obama's program sets up a showdown with congressional Republicans in coming months on how best to strengthen the recovery from economic recession and bring strength and stability.

Republicans, bolstered by the conservative push of the Tea Party movement, argue that the federal credit card is maxed out and that only reducing the size and cost of government will bring fiscal and economic stability.

Earlier Tuesday, the House passed a nonbinding resolution calling for immediate cuts in nonsecurity discretionary spending to 2008 levels, from before Obama took office.

Ryan, the new House Budget Committee chairman, said Americans are justifiably skeptical of government and both political parties when it comes to spending, and he challenged the spending policies of Obama's first two years in office.

"Depending on bureaucracy to foster innovation, competitiveness and wise consumer choices has never worked -- and it won't work now," Ryan said.

"What the Republicans have proposed is really not in the framework of anything realistic," Reid said earlier Tuesday. With Democrats still holding a slim Senate majority, it is highly unlikely that any House bill calling for the steep cuts proposed so far can win Senate approval.

The speech is one of the major Washington events of the year, full of political pageantry from the start, when the House sergeant at arms announces the entrance of the president. Military generals, Supreme Court justices and other luminaries attended.

This year's speech -- less than three weeks after a gunman in Tucson, Arizona, killed six people and critically injured Rep. Gabrielle Giffords, D-Arizona -- reflected the aftereffects of the tragedy.

In a symbol of desired political civility in the aftermath of the shootings, many legislators broke traditional segregated party seating and joined members of the other party across the political aisle.

Arizona's congressional delegation sat together, leaving an empty seat for Giffords, and many House members wore black and white lapel ribbons in honor of the Arizona victims.

"We ... are mindful of the empty chair in this chamber," Obama said to applause at the start, "and we pray for the health of our colleague -- and our friend -- Gabby Giffords."