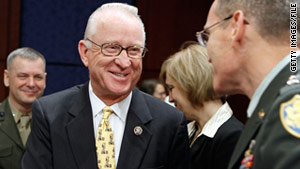 Washington (CNN) -- Members of Congress told senior Pakistani leaders that billions of dollars of U.S. aid are in jeopardy unless an American diplomat, detained since January 27 in connection with the shooting deaths of two Pakistani civilians, is released.

"We indicated it could very well be" that the U.S. might consider withholding funding, Rep. Howard "Buck" McKeon, R-California, said Tuesday after returning to Washington from meetings in Pakistan and Afghanistan.

The State Department has demanded that Raymond Davis be freed. Under international agreements, people carrying diplomatic passports are granted diplomatic immunity, the State Department said. The United States says Davis was assigned to the U.S. Embassy in Islamabad but was working at the U.S. Consulate in Lahore at the time of the shootings.

Davis says he was attacked by the men who were killed. He says they tried to rob him as he drove through a busy Lahore neighborhood, according to the U.S. Embassy in Pakistan. The families of the men filed police reports accusing Davis of murder, a police spokesman said.

McKeon said he and two other congressmen on the trip had frank conversations with Pakistani Prime Minister Yousaf Raza Gillani and other senior officials about Davis.

Rep. John Klein, R-Minnesota, who also was on the trip, warned of repercussions as Congress takes up the budget in coming days.

"It is entirely possible that a member of Congress would come down and offer an amendment to cut funding for Pakistan, based on their detaining Mr. Davis, and my guess is there would be a lot support for such an amendment, frankly because of the outrage of detaining an American with diplomatic immunity."

The U.S. spent more than $1.5 billion in nonmilitary aid to Pakistan in fiscal year 2010.

The detention has strained relations between the U.S. and Pakistan. Secretary of State Hillary Clinton, according to the State Department, has raised the issue with Pakistani officials and the U.S. ambassador to Pakistan, Cameron Munter, has met with Pakistani President Asif Ali Zardari on the issue. The White House has summoned the Pakistani ambassador to lodge a formal complaint.

State Department spokesman P.J. Crowley said in a Twitter message that the United States continues to stress to the Pakistanis that the case should be resolved "in accordance with international law."

The case has sparked some protest and fueled anti-American feelings in Pakistan. A Pakistani official, speaking to CNN on background because of the sensitivity of the issue, cautioned that "the American side should be mindful of the Pakistani people's sentiment about this."

Many Pakistanis "think that being American should not be grounds to get away with that crime," he said, noting that the recent suicide by the widow of one of the men who was shot "has added fuel to the fire."

A senior U.S. official told CNN Tuesday that Pakistani officials "do understand the seriousness of this. They have international obligations that they have to meet but they also have a political problem." The official would only speak on background because of the diplomatic sensitivity of the issue.

"Public opinion is very heated," the U.S. official said, "but the longer this goes on does not mean that public anger will dissipate. They need to resolve this, and the sooner they resolve it the better for the United States and for Pakistan."

Pakistani Ambassador Husain Haqqani also sent a message out via Twitter insisting that despite the tension, the countries' relationship "have proved resilient in the past" and "will endure, notwithstanding challenges."

Meanwhile, a new U.S. government report questions the impact of the billions of dollars Washington has sent to Pakistan in aid. The report by the inspectors general of the State Department, Department of Defense and the U.S. Agency for International Development (USAID) concluded that the U.S. has not been able to show any "measurable progress" in its civilian aid.

USAID, the report stated, "has not committed to a set of performance indicators to measure the success of its programs as traditionally required for proper project management." The report also singled out what it characterized as a failure by the U.S. Embassy in Islamabad to identify "a core set of development indicators" for measuring success in the U.S. development strategy there.

Flooding in Pakistan last summer, which affected more than 20 million people, forced both an increase and major shifts in where aid was needed, the investigators noted. In addition, security concerns have impeded "effective implementation and monitoring of assistance programs."