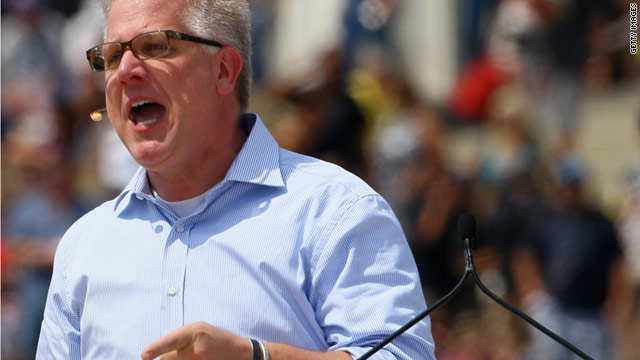 Right-wing political pundit TV personality Glenn Beck claims the U.S. has much to fear from the Egyptian uprising.
STORY HIGHLIGHTS

(CNN) -- Should we fear the uprising in Egypt? American conservatives are caught-up in an unusually open argument about the crowds in Cairo.

"This isn't about Egypt," said top-rated television personality Glenn Beck. "This is the story of everyone who has ever plotted, or wanted, to fundamentally change or destroy the Western way of life."

Beck is telling his enormous audience that the protests against Hosni Mubarak are part of an international Islamic resurgence sweeping all the way from Asia to England.

His opinions are among the most extreme in mainstream America today, but there are a range of opinions about Egypt among Republicans and others on the right.

"Only a child can believe that a democratic outcome is inevitable," writes conservative columnist Charles Krauthammer "And only a blinkered optimist can believe that it is even the most likely outcome."

Where is Hosni Mubarak?
RELATED TOPICS

Obama's stance seems to have evolved since the demonstrations started; his latest word is that the Mubarak regime should take prompt, careful steps to move towards democracy.

Most Republicans in Congress have quietly supported the president's position. But outside of Washington some prominent Republicans are breaking ranks.

Influential Republican strategist Newt Gingrich says the administration has been naïve about Egypt's most popular opposition movement, because of its roots in Islamic radicalism.

"The Muslim Brotherhood is a mortal enemy of our civilization," he said. "This administration, I think, does not have a clue about those realities."

"Nobody yet has explained to us - surely they know, more than the rest of us know - who is going to take the place of Mubarak," she said. "They know what's going on and aren't telling us."

It's not clear that the White House is hiding anything. A lot of America's plans are being unsettled unexpectedly by the sudden upheaval in Egypt.

President Obama clearly believes that the country and the region will benefit from more democracy. American conservatives aren't quite as convinced.