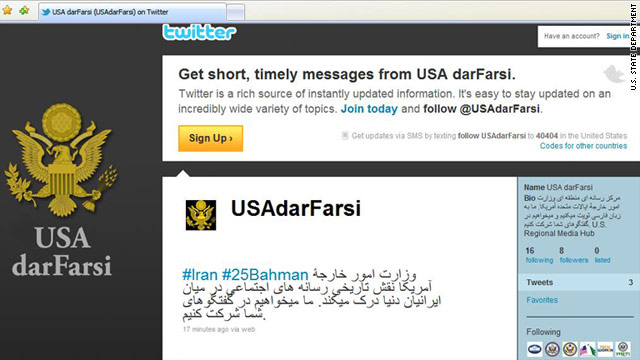 The Twitter feed was launched just one day before a planned opposition protest was set to take place in Iran.
STORY HIGHLIGHTS

(CNN) -- The U.S. State Department launched a new Farsi-language Twitter feed Sunday in a bid to connect with internet users in Iran.

"US State Dept recognizes historic role of social media among Iranians. We want to join in your conversations," the department said in its first tweet.

The feed was launched just one day before opposition leaders and activists in Iran have called for a protest in support of the Egyptian revolution, according to Saham News. The rally is planned to coincide with the 25th day of Bahman, the 11th month of the Persian calendar.

Following the resignation Friday of Egyptian President Hosni Mubarak, the head of Iran's National Security Council, among other Iranian authorities, lauded the leader's toppling, comparing "the Egyptian Revolution with the victory of Iran's Islamic Revolution," according to Iran's state-run media.

But while publicly praising the Egyptian uprising, the government has rounded up activists after Iran's two leading opposition figures called for Monday's rally.

"Iran has shown that the activities it praised Egyptians for it sees as illegal, illegitimate for its own people," the State Department said in its second tweet.

In its third tweet, the department called on Iran to allow people the same right to demonstrate as Egyptians had in Cairo.

The Farsi-language feed had eight followers as of Sunday night. The State Department's Arabic-language Twitter feed, launched last week, had more than 1,000 followers.