Wisconsin legislators aren't the first to walk out, leave town 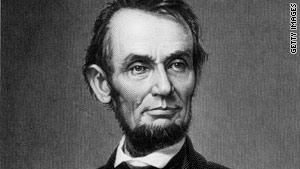 While in the Illinois House, Abraham Lincoln jumped out of the building in a futile bid to prevent foes from getting a quorum.
STORY HIGHLIGHTS
RELATED TOPICS

(CNN) -- This week's bitter budget showdown in Wisconsin isn't the first time state legislators have fled a state, left a building or refused to show when votes were called.

The "Killer Ds" and the "Texas 11," for example, skedaddled from Texas in 2003 to prevent consideration of a redistricting bill.

In 1839, a young Abraham Lincoln, serving as a Whig in the Illinois House, jumped out of the building in a futile bid to prevent Democrats from getting a quorum to vote on a banks bill.

Members of the 1891 Florida Senate went to Georgia in a bid to prevent a quorum for the election of a U.S. senator.

And in 1994, Republican members of the California Assembly refused to show up for floor sessions in an effort to prevent Democrats from electing Willie Brown as speaker with less than a majority vote.

The walkout by Democratic senators in Wisconsin, preventing a vote quorum on the contentious budget bill, can be added to a string of what might appear to be extreme actions to make a point.

"We have a very diverse society," said Karl Kurtz, director of the Trust for Representative Democracy at the National Conference of State Legislatures. "Legislatures are where public policies are fought out. By nature, it is a messy process."

Kurtz, who posted an item Friday about walkouts on the conference's Thicket blog, told CNN that "most states have rules to compel attendance of members."

Republican Gov. Scott Walker said he is trying to address a $137 million shortfall in the state budget. He wants public employees to pay more for their benefits, and he wants to eliminate most of their collective bargaining rights.

Walker called on 14 Democratic lawmakers to return to the state Capitol to vote on the measure Friday. Most or all of them traveled to neighboring Illinois.

"You can't operate a democracy if people don't show up," he said.

Although he might have the votes to pass the bill in the legislature, the problem for Walker is getting a quorum in the Senate.

The defecting lawmakers say they won't return until Walker agrees to negotiate with a teachers union on the governor's proposals to reduce the state's budget deficit by cutting benefits for its members. They also want language removed from the bill that critics say threatens the existence of all public employee unions in the state.

Senate Rule 16 states that "members of the senate may not be absent from the daily session during the entire day without first obtaining a leave of absence. The leave may be granted at any time by a majority vote of the senate."

It's hardly new for members of minority parties to find ways to stymie legislation.

"The rules and procedures generally provide that the majority rules, but [also] protect minority rights," said Kurtz, whose duties include public education and outreach.

Lawmakers can filibuster in some, but not all, states. They can also utilize certain bill passage requirements and a governor's veto, said Kurtz, who took no stance on the Wisconsin situation.

In most state legislatures, a quorum to do business constitutes a simple majority of the members, Kurtz wrote.

But in Indiana, Oregon, Tennessee and Texas, two-thirds of the members make up a quorum, and in Wisconsin, three-fifths of the members are required to act on budget and tax bills, making it easier to thwart a bill.

The most famous recent walkout was by Texas Democrats in 2003, who as the "Killer Ds" and "Texas 11" fled to Oklahoma and New Mexico to deny a quorum on a redistricting measure pushed by Republicans.

Bryan Kennedy, president of the Wisconsin chapter of the American Federation of Teachers, called the lawmakers' decision to skip town "courageous."

"The same could be said of the U.S. Senate," Kennedy told CNN. "A small minority continues to constantly filibuster every piece of legislation and bring that body to standstill. We don't have a filibuster here in Wisconsin.

"The only thing these brave senators could do was to leave the state so that they could not be forced or compelled to bring a quorum to the body," Kennedy said. "They stood up for worker rights."

But Walker called on the absent lawmakers to return "out of respect for the institution of the legislature and the democratic process."

Kurtz says the conference helps to make legislators and legislatures share ideas and be more effective.

"The public looks at legislatures, and all they see is bickering, which has a negative connotation," he said. "Negotiation and compromise are essential in a democratic society."