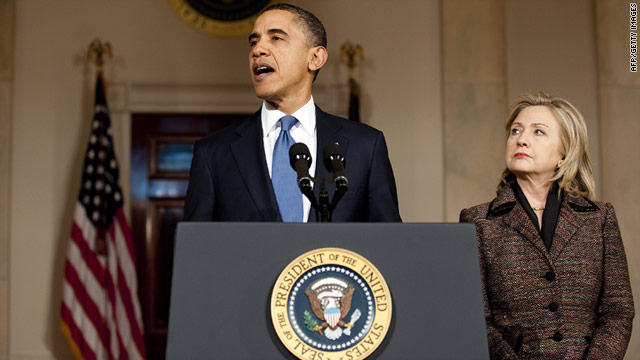 Washington (CNN) -- President Barack Obama said Wednesday that the United States strongly condemns the use of violence on protesters in Libya and said a unified international response was forming.

"The suffering and bloodshed is outrageous and it is unacceptable," Obama said in his strongest and most direct statements to date on the unrest in Libya. "So are threats and orders to shoot peaceful protesters and further punish the people of Libya. These actions violate international norms and every standard of common decency. This violence must stop."

Flanked by Secretary of State Hillary Clinton, Obama said Libya's government "must be held accountable" for its failure to meet its responsibilities, and he emphasized a growing international chorus of condemnation against the situation.

Secret voice from Inside Libya

Witness: 'People are dying every second'

He announced that Clinton would travel to Geneva, Switzerland, on Monday to join a Human Rights Council meeting. The group, part of the United Nations, is negotiating a resolution on Libya, according to European diplomats who spoke to CNN.

Among the elements under consideration for the resolution are a call on Libya to protect its citizens, condemnation of the violence and a demand for an international inquiry and access for humanitarian groups.

Obama emphasized the first priority of his administration was protecting U.S. citizens in Libya, where the State Department is trying to help Americans and their family members get out on a ferry from Tripoli, the capital. He called for all Americans in Libya to leave the country immediately.

He also said a range of possible U.S. actions were under consideration, including unilateral steps and efforts in concert with other nations and international groups.

"In a volatile situation like this one, it is imperative that the nations and peoples of the world speak with one voice, and that has been our focus," Obama said.

The president's public statement before television cameras was considered part of an administration effort to counter impressions of inaction and presidential silence involving Libya, with U.S. officials saying the government is considering a range of options to pressure Libyan leader Moammar Gadhafi.

Earlier Wednesday, Clinton told reporters that the Libyan government "will be held accountable" for the acts of violence taken against protesters.

"Everything will be on the table," she said in remarks at the State Department. "We will look at all the possible options" to end the violence.

"This is now the moment for the international community to act together," Clinton said.

White House Press Secretary Jay Carney had defended the administration's response to the Libya situation at a briefing with reporters Wednesday, saying the United States was consistent in condemning any violence in Libya, Egypt, Bahrain and other North African and Middle Eastern nations where protests have erupted in recent weeks.

He also noted that a range of possible steps against Libya were under consideration.

In a volatile situation like this one, it is imperative that the nations and peoples of the world speak with one voice.
--Barack Obama
RELATED TOPICS

"We continue to work with the (United Nations) in reviewing various options for actions that can be taken to compel Libya to ... end this terrible bloodshed," the spokesman said. Asked specifically about imposing a no-fly zone over Libya, Carney said, "A lot of options are under review: sanctions, other options."

At the same time, Carney stressed that while reform was necessary, "we are not dictating outcomes, and we are not telling the people of any country who their leaders should be or should not be."

State Department spokesman P.J. Crowley also said the United States is considering a range of "tools," including sanctions, against Libya to end the violence and "respect the rights of the Libyan people."

"That certainly includes looking at sanctions that could be imposed either bilaterally or multilaterally," Crowley told journalists at the State Department on Wednesday. "We believe it's important to coordinate our efforts with the international community, our European allies, the United Nations and organizations like the Arab League. We will be consulting broadly about these issues in the coming days."

The European Union said it was considering a host of sanctions against Libya, Reuters reported on Wednesday. Crowley said freezing the assets of the Libyan leader and government is also a possibility.

"That is in the toolbox," Crowley said.

Both Crowley and Carney insisted the United States would not ask for Gadhafi to step down.

"There are lots of actions that we can prospectively take. Many of these actions require legal orders, executive orders to be undertaken," Crowley said. "They've got to have a standard of due diligence to be able to support prospective actions to be taken. We are in the process of fully understanding and documenting what is occurring in Libya."

The United States has been struggling to evacuate its own citizens from the country. On Tuesday, the Libyan government refused permission for a U.S. charter sent to fly out Americans to land in Tripoli.

On Wednesday, a chartered ferry, with a maximum capacity of 575 passengers, was docked in Tripoli and had loaded U.S. citizens and 35 members of the embassy, including nonessential staff, in addition to citizens from some other countries, Crowley said.

However, the ferry set to travel to Malta was held up by heavy seas, according to a tweet from Crowley later Wednesday, and its departure time was uncertain.

CNN's Bonney Kapp and Tom Cohen contributed to this report