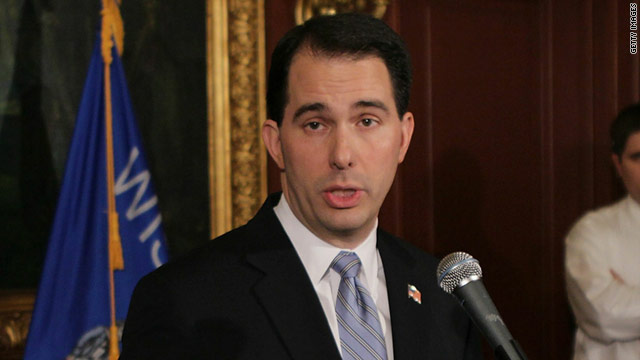 Murphy, editor of the news website "Buffalo Beast," posed as business tycoon David Koch while placing a call to Walker's office. He was able to secure a candid 20-minute conversation with the governor.

In a transcript of the conversation on the website, Walker discusses the idea of bringing 14 Democratic state senators -- who left the state to prevent a quorum for discussing the budget bill -- back to the assembly to "talk, not negotiate," allow them to recess, and then have the 19 Republican senators declare a quorum.

At that point, presumably, the Republican-led Senate would be able to move forward on the controversial legislation, which would end the state's public union workers' collective bargaining rights on all matters but salaries and wages. It would also raise the amount they would have to pay into their pensions and health insurance plans.

Murphy, posing as Koch, suggested "planting some troublemakers" among the people protesting the measure in Madison. "We thought about that," Walker allegedly replied.

The governor also drew an analogy between his standoff with the Wisconsin unions and President Ronald Reagan's decision to fire striking air traffic controllers in 1981.

"I think (Walker) is truly a right-wing delusional person," Murphy told CNN. "He believes in the fairy tale" of conservative economic theory. "But there's also got to be another part of him who believes he'll eventually profit (by breaking the unions) and so will the people who back him -- a la David Koch."

Murphy said he hopes "the right thing will happen" and "the unions will come out on top."

"My entire adult life has seemed like a series of moments where Democrats could have revitalized themselves and taken a stand," Murphy noted. "But every time" they've shifted to the political center "and lost the opportunity." As a result, "the country's gone further to the right."

Walker confirmed Wednesday that he had been duped by Murphy. But the plan for getting 14 Democrats back into the Capitol to force a quorum on the controversial budget bill is not "a trick," he insisted. It is part of a plan he has discussed publicly in the past, he said.

"I take phone calls all the time." Walker said at a news conference. "The things I said are the things I've said publicly all along. The fact of the matter is people have brought up all sorts of different options."

Walker continued: "In terms of other ways to come on in, it's not a trick. We've said it point blank; come on in and talk about it, I'm willing to talk about it ... but I ultimately believe it needs to lead to a vote. I don't think that's a trick, I think that's something I've said time and time again in front of all of you here, and stated very frankly.

"Now, I'm not going to allow one prank phone call to be a distraction from the reality that we have a job to do, and the job is to debate this bill, and you're only able to debate it if you're in the Capitol, focused on the task at hand."

Walker raised the specter of layoffs "that would affect 1,500 individuals" if the Democratic senators do not return to Madison promptly.

Describing the legislation as a necessary precursor to the process of producing a budget that addresses Wisconsin's $3.6 billion deficit, Walker on Wednesday said that if isn't passed by week's end, or "we lose out on about $165 million in savings" that the bill generates for debt restructuring, it could result in further layoffs.

"For us to lock in those savings, to have that done in anticipation of the budget bill, we need one thing and we need one thing in particular. And that is for those 14 state senators to come back to Wisconsin to debate this bill, to participate in democracy and to allow us to move forward, and to do ultimately the job they were elected to do," Walker said.