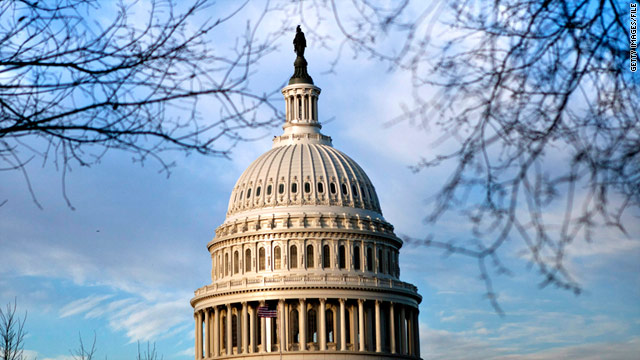 (CNN) -- One week before a potential government shutdown, Senate Democrats for the first time reacted positively to an offer from House Republicans that would keep the government running for two more weeks while cutting $4 billion.

"The plan the Republicans are floating today sounds like a modified version of what Democrats were talking about" in a proposal made to Republicans Thursday, said Jon Summers, a spokesman for Senate Majority Leader Harry Reid of Nevada.

However, the Democratic offer Thursday was slightly different in that it was related to a longer-term spending bill that would last until October 1, the beginning of the new fiscal year.

For the short-term bill, House Majority Leader Eric Cantor, R-Virginia, told reporters Friday the $4 billion in spending cuts would come from terminating eight programs that President Obama included in his proposed 2012 budget and the elimination of earmarks, the same two areas Senate Democrats said Thursday they were considering.

Among other cuts, the Republican plan targets $650 million in highway funds, $200 million in housing funds and $250 million for a reading program at the Department of Education and eliminates a literacy program at that department which the administration labeled "ineffective."

Republicans said the cuts they are offering are intended to find common ground with Democrats. "These are things that people have agreed to already," stressed House GOP Whip Kevin McCarthy.

Democrats have accused Republicans of wanting indiscriminate budget cuts that would hit a wide swath of government programs -- something that wouldn't happen in this latest short-term proposal from the GOP because it is more targeted.

"If they walk away from this offer they are actively engineering a government shutdown, " House Deputy Whip Peter Roskam told reporters in a conference call Friday.

"We are encouraged to hear that Republicans are abandoning their demands for extreme measures like cuts to border security, cancer research and food safety inspectors and instead moving close to Democrat's position that we should cut government spending in a smart, responsible way," said Summers, the Reid's spokesman.

The positive reaction from Democrats elicited an equally positive response from Senate Republican Leader Mitch McConnell who said, "There is now a clear path" to avoid a government shutdown.

House Republican leaders said they are pushing ahead on the short term measure which would allow more time for the House and Senate to negotiate a longer term spending bill for the rest of the year.

House Speaker John Boehner said he expects the measure will pass the House early next week, effectively tossing the ball into the Senate's court.

"I'm hopeful Senator Reid will quickly hold a vote on our short-term proposal so we can ensure the government remains open and that we're addressing the need to cut spending," Boehner said.