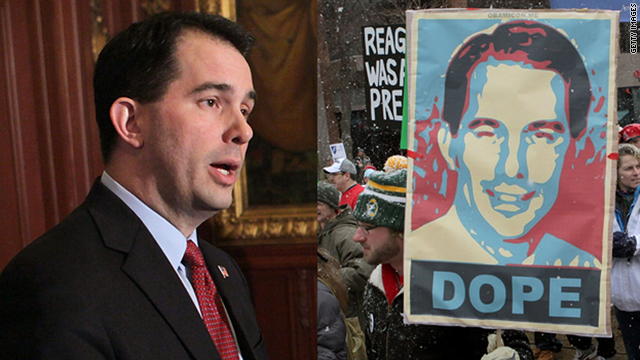 Wisconsin Gov. Scott Walker has been under fire from unions who are fighting for collective bargaining rights.
STORY HIGHLIGHTS

Washington (CNN) -- Some political experts have said that Wisconsin Gov. Scott Walker, in a battle with public employee unions over the right to collective bargaining, has overreached in his attempts to shore up the state's budget shortfall.

"I think it'd be fair to categorize the proposal (to cut union bargaining) as an overreach," said University of Wisconsin-Madison political science professor David Canon. "Maybe the biggest reason for that claim is the fact that he didn't campaign on this."

Walker, a former state legislator and Milwaukee County executive before he was elected governor last year, said he looks to Ronald Reagan for guidance in the current battle in which he's engaged. But one critic said Walker's public face conjures up images of a more recent president.

"Walker has been combative and steadfast, reminiscent more of George W. Bush's mystifying and utterly unjustified self-confidence (remember "I'm the decider?") than anything Ronald Reagan ever said or did," wrote Paul Fanlund of Wisconsin's progressive Capital Times.

Opponents have questioned Walker's motives as seeking prominence among like-minded conservatives or pursuing a vendetta against a traditional Republican foe. But another Wisconsin political scientist said while Walker "may, at some level, see himself as a vanguard of this new Republican effort," the governor is motivated by convictions.

Hill: 'Don't you whine to me, son!'
RELATED TOPICS

"I don't see this as delusions of grandeur or him doing this in any way to propel himself on the national stage," said Thomas Holbrook, a professor of government at the University of Wisconsin-Milwaukee. "The type of person he is, these are the things he believes needs to be done and he's got the majorities so he's going to do it."

Holbrook said Walker showed similar convictions when he was Milwaukee County executive from 2002 to 2010.

"He tended to stick to his guns there and say 'This is what I want, this is what I'm pushing for' and maybe he didn't get it in the end," Holbrook said. "But he didn't have a majority by any means."

Canon agreed, saying Walker's style of negotiating and a tough approach to unions is consistent with his time as county executive.

Former U.S. Comptroller Gen. David Walker wrote in the Washington Post that the Wisconsin governor has legitimate concerns about the collective bargaining process.

"However, he seems to have overreached in connection with some of his proposed solutions," David Walker wrote. "While there are many reasons that government workers should not be able to bargain over pension and health benefit levels, it is reasonable for them to be able to bargain over current pay, employee benefit contributions and normal work rules."

Wisconsin, which has elected liberal Democrats such as former Sen. Russ Feingold and U.S. Rep. Tammy Baldwin, shifted from blue to red in the 2010 midterm elections. The Republican wave not only hit congressional elections, but also statewide ones.

"He has an opportunity with these huge majorities in the legislature to get his agenda through and that's what he's doing," Holbrook said. "As for his political future, I'm not sure this is going to benefit him in the long run. I see it as more of coming from conviction and opportunity."

Walker got as much attention as his stand against unions when he was punked by a blogger who pretended to be a top GOP donor. On the call, Walker indicated that he looks to former President Reagan in the standoff. Reagan took on air traffic controllers and stood strong against communism, Walker noted on the call.

Canon noted a difference between Walker and Reagan, though -- Reagan compromised with Democrats during his two terms in office, negotiating on sticky issues such as Social Security and national security. Walker has shown no signs of backing down.

"He did have to compromise a fair amount when he was president," he said. "Scott Walker has unified Republican control of Wisconsin government, so he doesn't have to negotiate."

When Walker was campaigning, he said he wanted unions to start contributing more.

"But nobody saw this collective bargaining part of the proposal coming," Canon said. "That's why I think this could be seen as overreach. There's a pretty good chance he would not have been elected had this been part of the campaign in November."

In a USA Today-Gallup poll last week, 61% of those surveyed said they opposed eliminating collective bargaining rights if a similar bill was proposed in their state.

Republican governors are taking note at what's happening in Wisconsin and other states. Some prominent GOP governors are even coming out in support of collective bargaining rights.

Florida Gov. Rick Scott said in a recent interview with Tallahassee's WFLA radio that his belief is "as long as people know what they're doing, collective bargaining is fine."

New Jersey Gov. Chris Christie, who faces his own battles with teachers unions, recently told The New York Times that if collective bargaining is fair, "I have no problem with it."

Holbrook said that for Republican governors who are distancing themselves from the collective bargaining issue, it "gives them room to do other things that they'd not normally get away with -- simply because they can say, 'No I'm not going after collective bargaining.' "