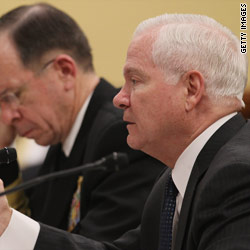 (CNN) -- After days of unrest in Libya, U.S. officials say a no-fly zone is an option for pushing Moammar Gadhafi from power and preventing bloodshed in toppling the regime.

But the use of no-fly zones is rife with danger for both sides, foreign experts say, and instituting one in Libya would raise the geopolitical stakes.

A no-fly zone is the aerial equivalent of a line in the sand. Violators, whether they are civilian aircraft or fighter jets, can get shot at.

A member of the U.N. Security Council who spoke on background told CNN that while there has been no formal discussion of a no-fly zone, there have been informal discussions outside of meetings, and "informal planning" is going on at NATO for such a scenario.

The diplomat said that if the Security Council discovers evidence that Gadhafi is using his air forces to kill or bomb civilians, fly in mercenaries or impede humanitarian assistance, it would be prepared to consider a no-fly zone.

Secretary of Defense Robert Gates warned Congress on Wednesday that any effort to create a no-fly zone in Libya would have to begin with an attack on the country.

"If ordered, we can do it," Gates said in answer to a question during a House Appropriations Committee hearing on the Pentagon's 2012 budget. But he warned that imposing such a zone would have to begin with an attack on Libya's anti-aircraft capability.

Zakaria: U.S. should not go it alone

While testifying on Capitol Hill on Tuesday, Gates and Joint Chiefs Chairman Adm. Mike Mullen said they had no confirmation of reports of aircraft controlled by Gadhafi firing on citizens, which has been an argument for enforcing a no-fly zone over the country.

But CNN's Ben Wedeman reported Wednesday that he had seen an aircraft drop bombs on civilians near the coastal city of Brega.

In a rare bit of bipartisanship in Washington, the Senate on Tuesday unanimously passed a nonbinding resolution calling for the Security Council to impose a no-fly zone over the country.

Sen. John Kerry, D-Massachusetts, chairman of the Senate Foreign Relations Committee, told Secretary of State Hillary Clinton on Wednesday that the international community "cannot be on the sidelines while airplanes are being allowed to bomb and strafe.

"A no-fly zone is not a long-term proposition, assuming the outcome is what all desire, and I believe that we ought to be ready to implement it as necessary."

U.S. officials say all military and diplomatic options are on the table, but Gates and Mullen told the hearing that pursuing a forced grounding of Libyan aircraft is complicated and risky.

One Western diplomat, leaving a Security Council meeting on Wednesday, said that a no-fly zone over Libya would be "extremely difficult to implement -- you need airports, hundreds of planes. It is an act of war, and you have to bear the consequences."

Such a move could risk the ire of Libya's Muslim and Arab neighbors and inflame already prickly relations with Security Council members Russia and China, experts say. Worse, such a provocative move could be perceived by Gadhafi's regime as a declaration of war.

"The worst-case scenario may not be horrible, but we have seen that the costs of perceived military unilateralism in the Arab world are high," said Michael O'Hanlon, a senior fellow at the Brookings Institution who specializes in national security and defense issues.

While the U.S. response has been diplomatic so far, a no-fly zone could cause things to escalate in a hurry: After the first Gulf War, the United States, with U.N. support, established a no-fly zone over southern Iraq in 1992 after reports that Saddam Hussein had used violence against Iraqis, specifically Kurds and Shiites. In the following years, Hussein's air forces openly challenged the zone, resulting in skirmishes and an air of brinkmanship that didn't end, fully, until 2003's Operation Iraqi Freedom.

And without the ground support that coalition forces had in the Gulf War, foreign policy experts are split on how effective a no-fly zone would be.

But one thing they all agree on: A no-fly zone could touch off a wider conflagration.

"There would be happiness by some that the U.S. and Europe are standing by them," said Steve Clemons, director of the American Strategy Program of the New America Foundation. "But a lot more will be skeptical. There is an institutional skepticism of anything from the West. Some will resent the perception of force robbing the Libyans of their own moment," he said.

Clinton told a congressional hearing Wednesday that is a consideration in how the U.S. is approaching the crisis.

"We are also very conscious of the desire by the Libyan opposition forces that they be seen doing this by themselves, on behalf of the Libyan people; that there not be outside intervention by an external force, because they want this to have been their accomplishment. We respect that," she said.

But she also said that the U.S. is taking steps with NATO allies to be prepared if action is necessary.

"One of those actions that is under review is a no-fly zone. There are arguments that would favor it, questions that would be raised about it, but it is under active consideration," she said.

How would other Security Council members react to a U.S.-instigated no-fly zone?

"China and Russia have been surprisingly supportive of actions in the Security Council over the weekend," said Jamie Fly, executive director of the Foreign Policy Initiative.

But Russia rejects the idea of a no-fly zone over Libya, and China usually opposes foreign intervention.

Clemons and Fly emphasized that international consensus could be difficult to come by.

"The price of China's support will be rather high," said Clemons, of the New America Foundation. "China has had its own Tiananmen Square and is sensitive to governments trying to quell disturbances. Its message [to foreign involvement] has always been 'Stay out,' " Clemons said.

"There's a lot of skepticism on whether China or Russia would support such an action [a no-fly zone], but the preferred option would be for NATO to act like it did in Kosovo," Fly said.

In 1999, NATO forces bombarded Serb and Yugoslav forces by air in response to atrocities committed against the Kosovar population. Kosovo, a province of Yugoslavia at the time, covered an area of about 4,200 square miles. Libya, at 700,000 square miles, would present a much larger task.

Logistical issues posed by Libya's location could be overcome, said O'Hanlon of the Brookings Institution. "Because Libya's cities are near the coast or on it, [the United States] could use aircraft carriers as well as bases in Italy, assuming Italy goes along, or Greece," he said.

Italy could well go along. The eastern coastal area of Libya, called Cyrenaica, was once an Italian colony. Bad feelings remain after Gadhafi expelled thousands of Italians shortly after coming to power.

Despite saying earlier that all options were on the table, the Obama administration on Tuesday signaled a cautious approach to any intervention that could be construed as military.

But casting U.N. support aside, the temptation for the United States to aid a people determined to free themselves from the societal restraints of an unpopular dictator may be too much to withstand, experts say.

The imagery of a NATO-backed aircraft swooping through the Tripoli skies may be just the moral boost the Libyan rebels need to topple the regime, said Thomas Donnelly, director of the American Enterprise Institute's Center for Defense Studies.

"Simply buzzing the Gadhafi palace would send a psychological message both to Gadhafi himself ... [and] to the revolutionaries in Libya," Donnelly said.

"It would dispirit the regime and would at least let the rebellion know the U.S. and Europeans are on their side and just over the horizon."