McCain vs. Pentagon: Getting personal over Libya Debate 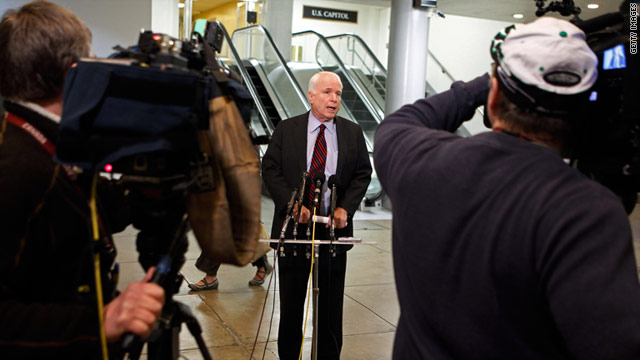 Sen. John McCain talks with reporters after a closed committee meeting with the Pentagon on Libya.
STORY HIGHLIGHTS

Washington (CNN) -- Trash talk and criticism seems the norm in these days of social networking, talk radio and cable pundits. But now it's spreading to the halls Capitol Hill and the leadership of the Department of Defense.

Defense Secretary Robert Gates may have started it when commenting on an idea for establishing a no-fly zone over Libya to protect rebel forces.

"There's a lot of, frankly, loose talk about some of these military options," Gates told a House committee on Wednesday. "Let's just call a spade a spade. A no-fly zone begins with an attack on Libya to destroy the air defenses. That's the way you do a no-fly zone."

Sen. John McCain, R-Arizona, has been one of the most vocal people on the Hill when it comes to supporting the idea of a no-fly zone. He responded Thursday in a Senate hearing.

"May I just say personally, I don't think it's loose talk on the part of the people on the ground in Libya, nor the Arab League nor others, including the prime minister of England, that this option should be given the strongest consideration."

But it's not just the idea of a no-fly zone that has these powerful men trading barbs in public.

On Tuesday, Gates and Adm. Michael Mullen, the chairman of the Joint Chiefs of Staff briefed reporters at the Pentagon. They were asked if they had seen independent confirmation of Libyan leader Moammar Gadhafi attacking his own people from the air.

The next day Mullen told the House Armed Services Committee that the Pentagon had seen media reports of the attacks but still had no official confirmation.

"We've also seen and have not been able to confirm that -- that any of the Libyan aircraft have fired on their own people. There have been reports of that, but we have been unable, through this morning, to confirm that that's actually happened," Mullen said.

McCain has twice made remarks very critical of Mullen. During a Senate Armed Services hearing on Thursday he questioned Gen. Martin Dempsey, the nominee to be the next Army chief of staff.

"Have you seen media reports that ... Gadhafi is using some of his air assets to attack or attempt to attack the pro- revolutionary forces?" McCain asked. Dempsey responded "I have, senator." To which McCain replied "You have seen that? You might tell Admiral Mullen that you've seen that."

The criticism continued Friday morning when McCain was talking to reporters on the Hill.

"When the chairman of the Joint Chiefs of Staff says that he has no sign of attacks from the air on citizenry and of course we see then shortly thereafter film of that happening ... then obviously I would assume they are not completely up to speed," McCain said.

To be fair, Mullen never said he'd seen no sign of attacks. He said he had no independent confirmation of media reports of the attack.

McCain isn't alone in criticizing the Defense Department leadership over some of the issues surrounding Libya. Sen. Jeff Sessions, R-Alabama, who attended a closed-door meeting between Defense officials and the Senate Armed Services Committee with McCain, said he shared McCain's concerns.

"I felt like our briefing lacked clarity on matters I would have hoped we had better intelligence on. It does appear that we sometimes get as much good information from the television as you do from the briefers," Sessions said.

CNN sought a response from Mullen to the criticism. His spokesman said they had no comment.