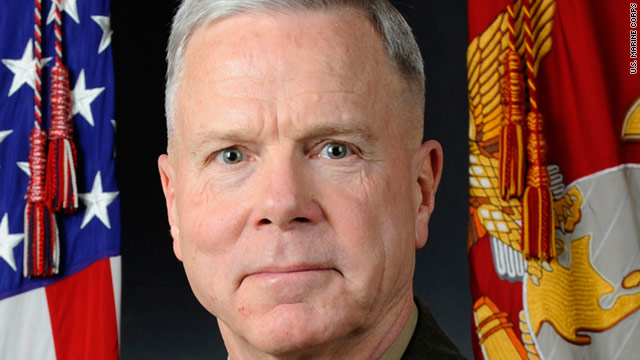 "I think it's modest," Amos responded. "I think probably their greatest threat are their helicopter-type forces."

Amos didn't know how many helicopters and fixed wing aircraft the Libyan government has but said the forces are predominately concentrated in four airbases around Tripoli.

"Has it been your experience in combat if the enemy controls the air above, particularly in terrain like Libya, it gives them an enormous advantage," McCain asked.

Amos would not answer the question directly, calling the environment where the Gadhafi forces are located "very complex."

"Sir, I think there are several things that would give the enemy enormous advantage. One is the ground movement of forces, vehicles, movement on the ground," Amos said. "So I think it's more than just aviation."

The Libyan Air Force has major deficiencies in its operational capabilities, according to Jane's Information Group, which does analysis of military forces. Its assessment notes it is possible that contract officers fly important missions due to the "low standard of locally trained aircrew."

Libya's Air Force command is in Tripoli, according to Jane's. Their helicopter fleet is small, perhaps no more than a few dozen attack helicopters built more than 30 years ago, it says. But the Air Force is believed to have many utility helicopters, as well, which can be used to move troops and equipment.

Compared with NATO pilots, Libya's fighter jet pilots are believed to get four times less training in the air, Jane's says, and Russian pilots who have been to Libya say that the Libyan pilots have a hard time tolerating high-altitude maneuvers. Most fighter jets are the old Soviet-era MiGs, and fewer than 200 are operational, according to Jane's.

McCain expressed frustration with the lack of answers to some of his questions, including a question on whether Amos had heard reports about Gadhafi flying mercenaries from other countries into Libya. Amos said he had not.

"You have been getting regular briefings?" McCain asked Amos. Amos said he had.