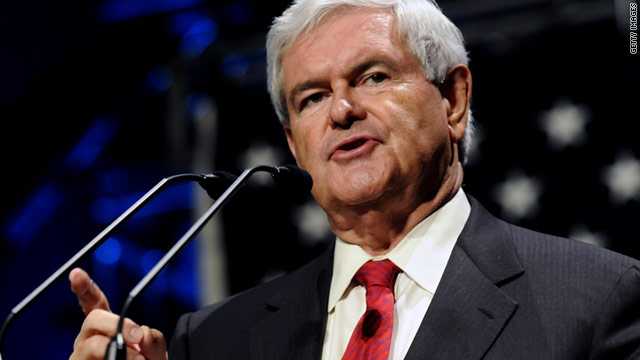 (CNN) -- A conservative activist who served in George W. Bush's White House, Suhail Khan has lately found himself at odds with certain figures who should be allies, like fellow activists on the right and some leading lights of the Republican Party.

Khan, a Muslim, has chafed at recent remarks about Islam from potential Republican presidential contenders like Sarah Palin, who has called on "peaceful Muslims" to oppose a proposed Islamic center near New York's ground zero, and Newt Gingrich, who has called for a federal ban on Sharia, or Islamic law.

Khan supports the New York Islamic center and says there's no threat of Sharia taking hold in the United States.

Then, last month, as he presided over a strategy session at the Conservative Political Action Conference in Washington, Khan was repeatedly interrupted by right-wing activists accusing him of having ties to the Islamic Brotherhood, the Islamist political party based in Egypt.

In recent days, Khan has gone on the offensive, meeting with Republican staffers on Capitol Hill and urging old friends to help halt or dramatically alter the direction of Republican Rep. Peter King's hearings on "radicalization in the American Muslim community," which begin Thursday.

"How did we go from the majority of American Muslims supporting Bush in 2000 to the very misguided comments of people like Palin and Gingrich and these King hearings," Khan asked in an interview this week.

While opinions vary on the propriety of Palin's and Gingrich's remarks and King's hearings, there appears to be a dramatic uptick recently in Republican rhetoric around Islam and Muslims.

In the run-up to last November's elections, Republicans including Palin and Gingrich weighed in against the proposed New York Islamic center, while Oklahoma voters approved a Republican-led effort to ban Sharia law (though the ban was blocked by a federal judge).

In the months since, roughly a dozen other states have started weighing bans on Sharia, with all or almost all of those efforts led by GOP lawmakers.

Other high visibility Republicans have criticized Islam or aspects of the religion or the Muslim community. Mike Huckabee, likely a 2012 presidential candidate, last month called Islam "the antithesis of the gospel of Christ" and criticized congregations that allow mosques to use their churches for prayers.

There are disagreements about what has caused such critiques to become an increasingly important part of GOP messaging and policy efforts. But with the Republican presidential primary on the horizon, as well as the 10-year anniversary of the September 11, 2001 terrorist attacks, political analysts say the trend is likely to accelerate.

Republican operatives attribute the movement to lingering fears of terrorism, including an apparent spike in homegrown terrorism.

"People are concerned about terrorists, and anytime someone goes on an airplane they¹re reminded of that," says Ed Rollins, a veteran Republican strategist and CNN political contributor. "There is great mystery about Islam. I don't think the discussion is in a sophisticated place right now, but King is going to make a case."

Frank Gaffney, a conservative Washington activist who has long criticized Islam but whose views have often been rejected by mainstream Republicans, says a spate of high-profile terrorist incidents on American soil is making the GOP more receptive to his message.

The alleged gunman behind the 2009 Fort Hood, Texas, massacre reportedly was radicalized by an American-born cleric based in Yemen. The failed Times Square bomber, sentenced to life in prison last year, is a naturalized U.S. citizen who said he was motivated by Islam.

"We have a problem, and the country is coming to grips with that," says Gaffney, who is among the activists alleging that Khan has ties to radical Islamist groups.

"The Republican presidential candidates are going to have to be knowledgeable about this problem to a degree that they haven't had to be up to this point," Gaffney says.

But other Republicans suggest that inflammatory remarks about Islam are coming from the party's fringes.

"So far, a great many leading Republican figures have been very temperate in their remarks" about Islam, says GOP strategist Whit Ayres. "They¹re making a distinction between peace-loving Muslims and radical terrorists."

He rattled off a list of likely 2012 Republican presidential contenders who he says fit that description: Mitt Romney, Tim Pawlenty, Mitch Daniels, Haley Barbour and Jon Huntsman, all current or former governors.

Asked about whether Palin, Gingrich and Huckabee would make the cut, Ayres said, "I'll leave it at that."

Few Republicans have criticized King's hearings, which could stretch out for more than a year. The chairman of the House Homeland Security Committee, King has responded to criticism that the sessions single out Muslims, saying, "I will not allow political correctness to obscure a real and dangerous threat to the safety and security of the citizens of the United States."

"We're talking about al Qaeda," King told CNN over the weekend. "There's been self-radicalization going on within the Muslim community, within a very small minority, but it's there, and that's where the threat is coming from at this time."

Of course, the broader issues of terrorism and national security, which often touch on Islam, aren't new to the GOP. John Esposito, a Georgetown University professor of religion and international affairs who focuses on Islam, said in an email message that rhetoric around Islam by "Republicans like Peter King and others go back to post-9/11."

"You could especially see it in presidential primaries," says Esposito, the co-editor of a new book on Islamophobia. "Mitt Romney, Rudy Giuliani, John McCain and Mike Huckabee all played the Muslim terrorism card in 2008 without carefully distinguishing between the small minority of cases at that time and the Muslim-American community."

Khan, who served in the Bush White House's Office of Public Liaison and in its Transportation Department, says the increasingly charged GOP rhetoric on Islam reflects a leadership vacuum in the party since it lost the White House in 2008.

"Hours after 9/11, Bush made it clear that ours was a war on violent extremists that were limited in number and were not representative of Islam," Khan says. "That leadership was key in reminding Americans that we¹re all Americans, regardless of faith or ethnic background."

Khan and other critics of the GOP's recent Islam critiques allege that the campaign is part of a broader effort to falsely brand President Obama, who is a Christian, as a Muslim.

"Conservatives see a nice nexus of being able to take advantage of pairing the president as Muslim while burnishing their national security credentials by fear mongering about Islam and Muslims," says Farhana Khera, executive director of Muslim Advocates, a national group.

A Pew survey last fall showed that nearly one in five Americans believe Obama is a Muslim, up from around one in 10 Americans who said he was Muslim in 2009.

Republicans deny allegations of such a campaign. But some non-Muslim strategists within the party have also criticized the way some if its spokespeople treat Islam, warning that harsh rhetoric on Islam could scare off Muslim voters and other religious minorities.

"The support for criticizing a mosque is half a mile wide and an inch deep," Grover Norquist, a top party strategist, told the Washington Post last year around the time of the controversy over the Islamic center near ground zero.

"And at the end of the process," he said, "the only people who will remember it are the people who feel threatened by this -- not just Muslims, but Sikhs, Jews, Hindus, Buddhists and Mormons."