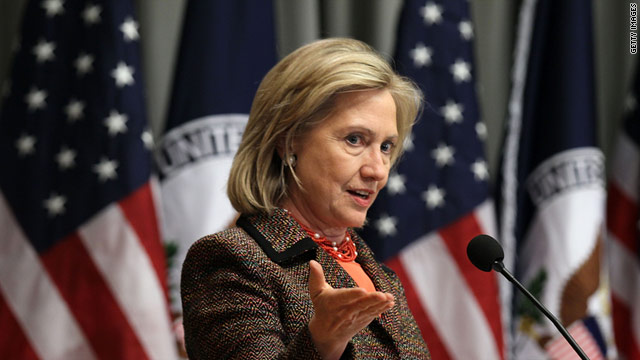 Washington (CNN) -- The Obama administration sent mixed signals Wednesday on its stance on a no-fly zone in Libya, with Secretary of State Hillary Clinton saying U.N. backing was essential while White House spokesman Jay Carney left the door open to the United States acting unilaterally or in concert with NATO allies.

Some critics, as well as top Democrats such as Sen. John Kerry of Massachusetts, have called for a stronger U.S. response to the Libya violence, including the possible imposition of a no-fly zone that would prevent Libyan military aircraft from attacking the Libyan people.

President Barack Obama has made clear he wants any military response to come from the international community, to prevent Libyan leader Moammar Gadhafi from blaming the United States for his predicament.

Clinton emphasized that point Wednesday in an interview with CBS News, saying the administration seeks to avoid "any room for anyone, including Col. Gadhafi, to say that 'This isn't about my people, this is about outsiders.' "

Reporter: 'These are civilians'

She noted that the British and French governments were bringing a draft resolution on international action to the United Nations, saying: "I think it's very important that there be a U.N. decision on whatever might be done."

"We believe it's important that this not be an American, or a NATO, or a European effort. It needs to be an international one," Clinton said.

Approval by the U.N. Security Council for international military intervention in Libya, including a no-fly zone, is considered unlikely due to expected opposition from China and Russia. Both countries are believed to be reluctant to set a precedent of U.N.-supported military action in an internal conflict.

Clinton acknowledged opposition to a no-fly zone from within the U.N. Security Council, but said efforts continued to come up with an acceptable package. She also emphasized the need to have Arab nations and bodies such as the Arab League in support.

A few hours later, Carney told reporters at the White House that U.N. backing was just one possible form of the international support sought for any military intervention in Libya.

"It is our strong preference in this situation and many others that we act together with our international partners," said Carney, who then added that "we always reserve the right, NATO does rather, as does the United States, to act on our own."

At the State Department, spokesman Mark Toner also stopped short of insisting on U.N. backing, instead saying: "It's always desirable."

In a letter dated March 5 to the U.N. General Assembly, Libya's Interim Transitional National Council -- the opposition movement seeking to oust Gadhafi -- asked for the international community to "fulfill its obligations to protect the Libyan people from any further genocide and crimes against humanity without any direct military intervention on Libyan soil."

Carney and other administration officials contend the United States already has moved quickly in the crisis by freezing $30 billion in U.S. assets of Gadhafi, supporting further U.N. sanctions on Libya and sending military aircraft to help transport foreign nationals who fled the fighting there.

At the same time, top U.S. defense officials including Defense Secretary Robert Gates warn that imposing such a no-fly zone amounts to an act of war that requires major resources and political will.

On Wednesday, Carney reiterated the White House stance that all options remain on the table regarding Libya, and he specified that a possible no-fly zone was being actively discussed by both the United States and NATO.

Overall, though, the Obama administration has tried to downplay the possibility of imposing a no-fly zone without significant international backing, especially from the Arab world.

Asked about it Sunday on the NBC program "Meet the Press, White House Chief of Staff Bill Daley complained that people calling for such a move "talk about it like it's a game or a video game or something."

Obama, in response to questions about the U.S. response in Libya, told reporters last week that that it was important to ensure that the Libyan people feel "full ownership" for any transformation and cited Egypt's recent revolution as an example.

"We did not see anti-American sentiment arising out of that movement in Egypt precisely because they felt that we hadn't tried to engineer or impose a particular outcome, but rather they owned it," Obama said.