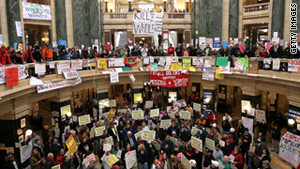 Madison, Wisconsin (CNN) -- A Wisconsin Republican official compared the protests over Gov. Scott Walker's attempts to curtail collective bargaining rights for public employees to the Holocaust on Wednesday, a remark he later conceded was "a bad word" to use.

Wisconsin Agriculture, Trade and Consumer Protection Secretary Ben Brancel, a Walker appointee, told visiting members of the state Farm Bureau that rookie lawmakers "got stuck in the middle of the Holocaust" when pro-union demonstrators led rallies and camped out in the Capitol for days.

"Some of you might have had past relationships with your legislators, because they've been here for a while," Brancel said. "But there's a huge number who this is their first time around. They came to town with a lot of ideas and a lot of concepts they could really work on, and they got stuck in the middle of the Holocaust and the horror story that was going on in town as far as people using the building all night long and some shenanigans."

Brancel was making off-the-cuff remarks before the arrival of Walker, who spoke to the farmers Wednesday afternoon and was unaware of his appointee's comments. Brancel later told reporters, "I better go back to English school."

"That was a bad word," he said. "It should have been total confusion in the Capitol. It was not an appropriate word to use in the context of which I used it."

Brancel also issued a written apology through his office, apologizing for his "unfortunate choice of words." And Walker "hopes everyone accepts the apology that was immediately issued," Walker's office said in a separate statement.

Walker and GOP lawmakers are trying to close a $137 million budget shortfall with a plan that calls for curbs on public employee union bargaining rights and requires public workers, with the exception of police and firefighters, to cover more of their retirement plans and health care premiums. The proposal ignited fierce opposition from labor leaders and their supporters, and state Senate Democrats have skipped the state to prevent their chamber from advancing the bill.

Public employee unions agreed to financial concessions that they say will help meet the state's fiscal needs, but Walker has said the limits on public bargaining are a critical component of his plan.

Wisconsin Republicans cleared a final hurdle to a controversial proposal on Thursday after the state's Assembly passed an amended version of a bill.
Protesters firm against budget bill

Protesters have been converging on the Capitol since February to protest the budget bill. Their voices are angry, energetic, accusatory.
WI protests compared to 'Holocaust'

A Wisconsin Republican compared the protests over attempts to curtail collective bargaining rights for public employees to the Holocaust.
Did Walker overreach in union battle?

Political experts have said that Gov. Scott Walker, in a battle with public employee unions, has overreached in his attempts to shore up budget.
Gov to dems: Return or get laid off

Wisconsin Gov. Scott Walker warned 14 absent lawmakers trying to stall his controversial budget bill to return to vote on the measure, or get laid off.
Taxpayers' gain, public workers' pain

The New York Times reported on the story of the juvenile detention center in Wisconsin's rural Manitowoc County, on the shores of Lake Michigan.
Wisconsin risks losing public workers

Stripping Wisconsin public unions' right to bargain will not help the budget. Instead, the best public sector employees leave for the private sector.
The trouble with public pensions

Who would have thought it? Wisconsin is the San Diego of the Midwest.