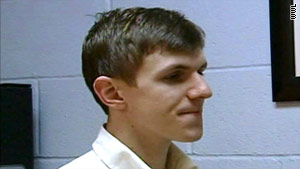 A video from conservative activist James O'Keefe sparked this most recent effort to strip NPR of public funding.
STORY HIGHLIGHTS

Washington (CNN) -- The House of Representatives passed legislation Thursday that would bar federal funding for National Public Radio -- a longtime target of conservatives irritated by what they consider the outlet's liberal bias.

The bill passed 228-192 in a sharply partisan vote. Most Republicans backed the measure while every Democrat opposed it.

While the measure was expected to pass the GOP-controlled House, it is believed to have little chance of clearing the Democratic-controlled Senate.

The move to strip funding comes after a conservative activist secretly taped a NPR fundraising executive criticizing Tea Party supporters and saying public radio would be better off without federal money.

On Tuesday, the House voted to cut $50 million from the Corporation for Public Broadcasting, which helps support NPR. That measure was part of a larger bill to keep the government running for the next three weeks.

Meet the man behind the NPR sting

The meltdown at NPR: What happens now?

The House moved last month to eliminate all federal funding for the CPB as part of its bill to fund the government for the rest of the fiscal year. That bill, however, failed to pass the Senate.

Among other things, the measure which passed the House Thursday would bar any of NPR's affiliate radio stations across the country from using any federal funds to purchase programming from NPR.

Forty percent of NPR's funding comes from member station fees, according to the outlet. Roughly 2% comes from federal grants.

"We have to deal with the fiscal reality of this country," said Rep. Jason Chaffetz, R-Utah. America has to figure out "how to do more with less. ... We can't afford to be all things to all people."

Public radio "has been wildly successful," Chaffetz argued. The outlet's total number of listeners is rising, so "it should be moving toward a model where (it) can sustain" itself rather than relying on taxpayers.

NPR's listeners are largely "wealthy" and "well educated," claimed Rep. Marsha Blackburn, R-Tennessee. "It is time for us to remove the federal support system ... and see what NPR can do on (its) own."

"With the national debt over $13 trillion, the government simply can't afford to fund non-essential services," said Rep. Doug Lamborn, R-Colorado. "NPR can survive on its own." We need to "remove the taxpayer from the equation."

Democrats argued that NPR serves a vital public function. Stripping it of public funds will do little to reduce the federal deficit while cutting popular programming in small towns and rural areas across the country, they claimed.

"This bill would wipe (programs like) 'Car Talk' off the road. It would wipe 'Lake Wobegon' right off the map," said Rep. Ed Markey, D-Massachusetts. "GOP used to stand for Grand Old Party. Now it stands for Gut Our Programs."

Markey argued that many local public stations would not be able to attract a sufficient audience and fundraising base to survive keep without easy access to NPR's signature programs, such as "All Things Considered." This bill "will snuff out stations from coast to coast," he predicted. "This makes no sense."

Rep. Earl Blumenauer, D-Oregon, circulated a letter to House members earlier in the week citing press reports that he said demonstrated that James O'Keefe -- the conservative activist who set up the taping -- "deceptively edited" the video to target NPR.

CNN's Alan Silverleib and Deirdre Walsh contributed to this report