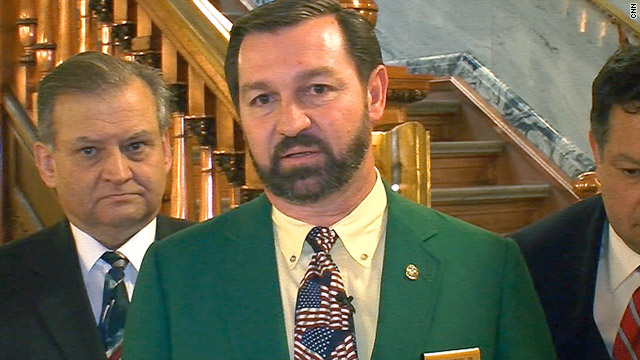 "I apologize to anyone that I offended with my inappropriate comment," Kansas state lawmaker Virgil Peck said.
STORY HIGHLIGHTS

Topeka, Kansas (CNN) -- A Kansas state lawmaker apologized in person Thursday for a controversial remark he made, suggesting that unauthorized immigrants should be shot.

"I'm Virgil Peck, and on Monday, I made an inappropriate comment," the Republican state representative told CNN in an on-camera statement Thursday. "For that, I'm sorry, and I apologize to anyone that I offended with my inappropriate comment. I'll be more careful with my words in the future."

On Monday, Peck made headlines when, during an appropriations committee meeting, he made a reference to an agricultural program that controls the state's feral hog population by shooting them from helicopters.

"Looks like to me, if shooting these immigrating feral hogs works, maybe we have found a (solution) to our illegal immigration problem," Peck said.

The comments sparked the ire of residents and officials from Kansas to Washington, but Peck has been largely tight-lipped about his remarks.

He initially said he was joking and then released a terse, two-sentence statement saying, "My statements (Monday) were regrettable. Please accept my apology."

When asked for additional comment on the controversy earlier Thursday, Peck gave CNN a printed copy of the statement.

He did not take any questions after his verbal statement to reporters. He was flanked by the three Hispanic Republican representatives serving in the state legislation.

State Rep. Reynaldo Mesa said the trio of legislators does not condone Peck's comments but has decided to stand by Peck.

"He's offered his apology. We believe he is very sincere," Mesa said.

U.S. Rep. Charlie Gonzalez, D-Texas, chairman of the Congressional Hispanic Caucus, said he was dismayed by Peck's comments about immigrants.

"His comments were dehumanizing and inappropriate and have no place in our national discourse," Gonzalez said. "They are also counterproductive to having a responsible debate, have the potential to result in regrettable consequences and could incite prejudices and biases that are harmful to our nation."

"I think it's completely inappropriate," Brownback said, according to the Topeka Capital-Journal.

On Thursday, Sherriene Jones-Sontag, a spokeswoman for the governor, said he would have no further comment on the issue and that he considered the matter closed.

The Kansas Republican House leadership also said the remark was inappropriate but made no mention of whether the lawmaker should face any punishment or sanction.

"We have visited and counseled with Representative Peck about the matter and have accepted his sincere apology for the inappropriate remark, which, although made in jest, was not thereby made any less offensive," the statement said. "His acknowledgment of his error, his apology to the public and his House colleagues and his pledge to be more vigilant and respectful in his discourse is appreciated and accepted."

Before this week, Peck was not known for being outspoken on the illegal immigration issue and has not been linked to any nativist groups. But anti-immigrant views are not unheard-of in Kansas.

According to the Southern Poverty Law Center, a small increase in the number of anti-immigrant vigilante groups nationwide occurred from 2009 to 2010. The organization, which tracks hate groups, identified six chapters of anti-immigrant groups in Kansas.