Iowa Republicans eager for 2012 race to kick into gear 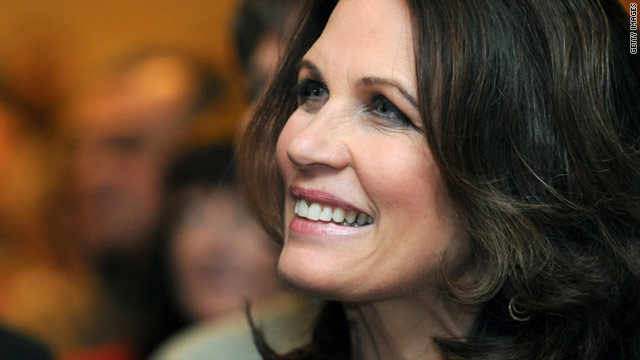 "I'm in, you're in," Michele Bachmann told a conference audience in Iowa, though in fact she is not, yet.
STORY HIGHLIGHTS

Safari Club International's state chapter hosted an exposition and conducted seminars at the Prairie Meadows Racetrack and Casino in Altoona -- an event capped by a banquet and auction in the evening. It was a gathering tailor-made for retail politics. At least 25 county coordinators for the 2008 John McCain-Sarah Palin Iowa presidential campaign operation attended the event.

But not one of the dozen or so potential GOP presidential candidates appeared at the banquet -- passing on a chance to speak directly to these politically influential Iowans.

At the same time the SCI event was happening, another gathering -- this one explicitly political -- was taking place in a hotel ballroom in Des Moines. The daylong "Conservative Principles" conference had panel discussions on "Family Values" and "Healthcare Repeal" and featured five Republicans -- all seriously eyeing White House bids -- explaining their vision for the country in 15-minute addresses.

Funk said he understood that the conference in Des Moines was a natural fit for the candidates, but he added that a golden political opportunity had been missed by these candidates by not making an effort to stop by the SCI banquet.

"Not having someone on the ground who knows the neighborhood doesn't help you," said Funk, who stopped in at the conference, which was hosted by U.S. Rep. Steve King, R-Iowa. Funk was referring to the relatively slow hiring process of Iowa GOP operatives by Republican candidates exploring White House bids. These operatives know caucus-goers on a first-name basis as well as what events Republican candidates need to attend.

Funk's bewilderment at the slow start of the 2012 presidential contest is a theme echoed by many Iowa activists itching for the race for the GOP presidential nomination to finally come into full swing.

"I am puzzled that we are taking such a slow start when the urgency is so great among Republicans to change the leadership in the White House," said Ann Trimble-Ray, chair of the Sac County Republican Party and an adviser to King.

So far, only a few Republicans have declared their candidacies for the GOP presidential nomination. That is not to say several other Republicans considering White House bids have not taken steps towards a run -- but they have yet to make it official.

I am puzzled that we are taking such a slow start when the urgency is so great among Republicans to change the leadership in the White House.
--Ann Trimble-Ray, Sac County Republican Party chair
RELATED TOPICS

But the longer Huckabee and Palin wait to make a decision, the harder it will be for either of them to build support and momentum in this state, said Jennifer Green, a conservative commentator who appears on WHO Radio in Des Moines. Green supported Huckabee in the 2008 caucuses -- which he won -- but added she is not sure if she will do so again if he runs in 2012.

"Everybody is waiting to see if Mike Huckabee gets in," she said. "But he will have to earn my vote ... all over again."

The absence of Huckabee and Palin appears to have opened a door for Minnesota Rep. Michele Bachmann, who is expected to form a presidential exploratory committee in the coming months.

But until Bachmann forms the presidential exploratory committee and begins hiring staff -- tangible signs that she is a serious candidate -- she is not really in. And so goes the frustration in Iowa.