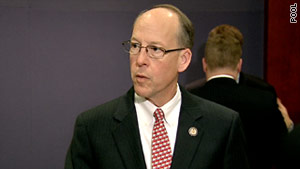 The question dominated a classified briefing by Secretary of State Hillary Clinton and Defense Secretary Robert Gates for the U.S. House, according to House members who attended. A separate briefing for the Senate occured shortly afterward.

Other issues raised by the legislators included whether the United States intended to arm the Libyan rebels, and the cost of the mission to U.S. taxpayers, participants told CNN.

Clinton and Gates made clear that no decision had been made on arming the rebels, with Congress members from both parties saying they believed it would be a bad idea, according to participants.

"I strongly oppose arming rebels because in that complex tribal patchwork that makes up this insurgency, it is very uncoordinated," Republican Rep. Geoff Davis of Kentucky told CNN, adding that Islamic radicals were joining the Libyan opposition.

Republican Sen. Lindsey Graham of South Carolina said he wanted to help the rebels, but not with arms. Instead, he called for aerial bombardment of Gadhafi and his inner circle in Tripoli, the Libyan capital, which Graham said would have more impact than sanctions and seizing overseas assets.

"What they would worry about is having their compounds bombed by the most capable air force in the world," Graham told CNN.

No 'prolonged US engagement' in Libya

Rumsfeld speaks out on mission in Libya

On congressional authorization, the White House has said Obama acted within his authority under the War Powers Act, noting that the president and other officials consulted congressional leaders several times in the run-up to the March 19 deployment of U.S. forces to the U.N.-authorized Libya mission.

After Wednesday's briefing, legislators said Clinton told them the administration acted within the requirements of the War Powers Act and needed no congressional authorization for further decisions on the mission.

"Briefing Congress is not the same as authorization," Nadler told reporters. "Briefing is nice, but authorization is required under the law."

"I can't think of a time in our nation's history where we put our men and women in combat like this without an administration of either party coming to the Congress first," said Republican Rep. Greg Walden of Oregon.

He repeated a GOP criticism that the administration worked harder to get NATO and Arab League backing for the Libya mission than congressional support.

Davis said the briefing made clear that Congress shouldn't expect to be asked for authorization in the future.

"The implication was very strong that they saw no need for any authorization at any time regardless of how long this were to continue," Davis said.

Democratic Rep. Norm Dicks, D-Washington, conceded that Congress is rarely satisfied with how any administration consults on such important issues.

He offered some details from the briefing, saying he expected Obama and Gates to use money already budgeted to the Department of Defense this year instead of seeking supplemental funding that would require congressional approval.

"That would be an easier way to do it," Dicks said. "If he has to get money through (with a supplemental measure), that would set off a lot of debate."

Dicks also said the mission had cost about $550 million so far, mostly due to the U.S. Tomahawk missiles fired and the loss of one jet fighter. The continuing cost would be about $40 million a month, he said.

Nadler said Gates convinced him that a massacre in Libya was imminent before the U.S.-led coalition launched airstrikes to enforce a no-fly zone and prevent Libyan leader Moammar Gadhafi's forces from attacking the rebel stronghold of Benghazi.

"There was considerable evidence" of a pending slaughter, Nadler said. "That was answered to me satisfactorily."

Nadler also said Gates and Clinton made clear there would be no U.S. ground forces involved in the Libya conflict.

Asked if Congress supports the mission, Nadler said he thinks there is "considerable" support for finishing it now that it's started, but "that support will erode if it takes a while."