Arming Libyan rebels: Should U.S. do it? 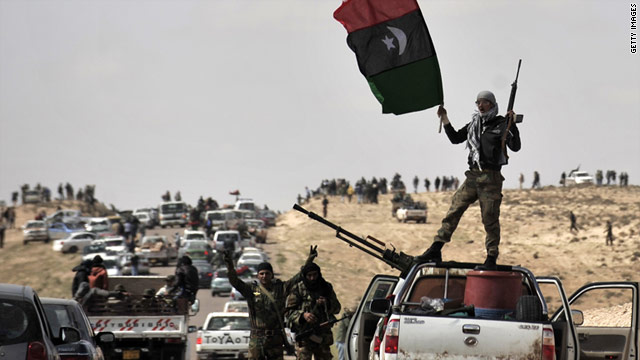 Libyan rebels wave the flag of the rebellion as they gather near Brega March 31.
STORY HIGHLIGHTS

Washington (CNN) -- The United States has seen what happens when it arms rebel forces against brutal regimes -- and how it can backfire.

Libya could end up in that same category.

Here are some frequently asked questions on the situation in Libya, what the options are and the debate over arming the rebels.

The North Atlantic Treaty Organization, of which the United States is a member, is working to take down Col. Moammar Gadhafi's brutal regime, which has reportedly killed thousands of Libyans since a revolt broke out over the past month.

Adm. Mike Mullen, the chairman of the Joint Chiefs of Staff, said Thursday that Gadhafi still wants to take back the city of Benghazi, the rebel stronghold, and that the dictator "will kill as many (people) as he must to crush the rebellion."

France was the first nation to step in to enforce the no-fly zone directive. French fighter jets struck military targets in eastern Libya on March 19.

The United States has since handed over the brunt of the mission to NATO, but it is still the major force behind the effort.

But administration officials, including Defense Secretary Robert Gates, insist that "there will be no boots on the ground," or sending in U.S. troops to support the rebels.

By taking down Gadhafi, the country stands a chance at developing a democracy. In essence, Gadhafi needs to go and prevent a humanitarian and refugee crisis that could help destabilize the entire region.

It's a point that has been made clear from President Barack Obama, his administration and leaders around the world.

Who are the opposition and what do they want?

Simply put, Libyans who are outraged at the atrocities that the Gadhafi regime has inflicted on its people including massive human rights violations.

But if the rebels are successful, there are concerns that such a fractured group could form an actual government -- or work with the U.S.

And perhaps that is why Central Intelligence Agency operatives are inside Libya, a U.S. intelligence source said, to get firsthand knowledge of who the coalition is working with.

Rumsfeld speaks out on mission in Libya

In addition, a former counterterrorism official with knowledge of the U.S. policy in Libya told CNN there is a presidential finding authorizing the CIA to conduct operations in support of U.S. policy there, including assessing and meeting with the opposition and determining their needs.

Why it's a bad idea

Training Libyan rebels against Gadhafi's forces comes down to education. Can the rogue group learn to use sophisticated machinery and the tactics to employ it in time -- and with a clear directive?

"This is a nightmare trying to train the Libyans. I tried to do it many years ago, said Robert Baer, a former CIA operative. "These people are very difficult to manage."

Baer added that the type of discipline needed "takes a very, very long time, especially when you're dealing with a foreign force and you have to have Arabic speakers on the ground. It's tough."

So is it practical to arm the rebels fast enough?

"Well, the notion of the gang that couldn't shoot straight might be lived out," Retired Army Brigadier Gen. James Marks said. "Absolutely, there must be some degree of training that is associated with arming this force. However, some weapons systems clearly they can get a handle on and they can use immediately."

"We simply don't have control over the rebels. They don't have to follow our orders," Baer said. "They take our money and weapons and go shoot who they want."

Why it's a good idea

"I think we should be doing everything we can to support the opposition," he said. "It's true, we don't know what the opposition would be like when they take over, but there are actually some promising signs."

Another Bush official said that arming rebels is vital to the overall mission.

"Somebody has got to be on the ground doing the hard work of taking the territory," said former National Security adviser Stephen Hadley. "And if it's not going to be U.S. troops -- and nobody really wants that -- then we're going to have to deal with the Libyan people and try to empower them to fight and win their own freedom. And giving them weapons has to be part of that."

Will history come back to haunt us?

The Soviet Union fought a brutal war in Afghanistan in the 1980s. The U.S., strictly opposed to the move by the "evil empire," as former President Ronald Reagan called it, tried to tilt the balance by arming the Afghan mujahadeen against the Soviets.

Though in the short term it helped the mujahadeen drive the Soviets out, some of those same weapons were used years later against the U.S. during the war in Afghanistan -- the longest war in the country's history.

Rep. Mike Rogers, R-Michigan, said in a statement that he has deep concerns over such past efforts.

"We don't have to look very far back in history to find examples of the unintended consequences of passing out advanced weapons to a group of fighters we didn't know as well as we should have," said Rogers, , who is chairman of of the House Permanent Select Committee on Intelligence. "We need to be very careful before rushing into a decision that could come back to haunt us."

"We did a good job in Afghanistan (arming) the Northern Alliance and some of their militias in the south and they were very successful in driving al Qaeda out of Afghanistan and of changing the regime from the Taliban to the Afghan government," Rumsfield said.

According to Adm. James Stavrides, the U.S. NATO commander, U.S. intelligence has detected evidence of "flickers" of al Qaeda and Hezbollah elements among the rebels -- though the influence appears to be minimal.

Senior officials and White House Press Secretary Jay Carney seemed to downplay that notion, saying that the values being expressed by the rebels are "antithetical to the purposes and ideals set forth by terrorist organizations."

Rumsfeld, one of the key figure in taking the U.S. to war in Iraq, said there are concerns about terrorist groups such as al Qaeda and Hezbollah influencing the rebels.

He said that there are still a great deal of questions as to who is involved in the rebel group and therefore "you have to be careful about arming rebels."

Rep. Dan Burton, R-Indiana, asked Thursday: "How many of these citizen-soldiers fighting against Gadhafi -- how many are people who are tied into terrorist organizations in Iraq and Afghanistan and do we know who they are? Do we have any idea?"

He added that it's "a heck of a situation when we go into a conflict and we don't know who we are supporting."

What's it going to cost?

While NATO has taken over the military operations in Libya, the U.S. still has committed itself to support, which could result in billions of dollars in aid going forward.

Meanwhile in Washington, the battle in Congress is over cutting spending, reducing the deficit and passing a 2011 budget.

There is no doubt that critics on both sides of the aisle will grill administration officials on why the U.S. should add money the country doesn't have -- and whether the operation could stretch the already overstretched U.S. military.