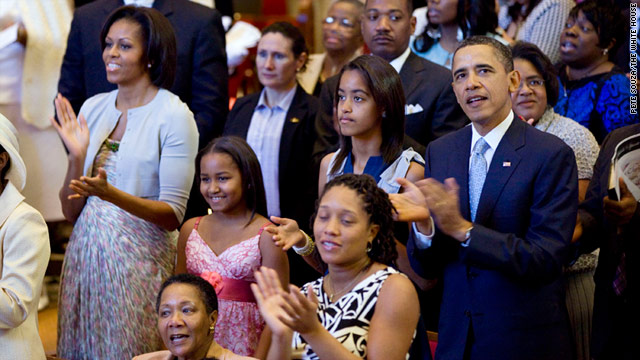 Washington (CNN) -- President Barack Obama and his family attended the Easter Sunday service at Shiloh Baptist Church, which was founded by freed slaves in 1863.

The first family entered the church to a standing ovation, then joined in singing with the choir, backed by a live band that included a guitar, keyboard and drums.

Rev. Wallace Charles Smith welcomed the Obamas, noting the congregants pray for them every Sunday.

At collection time, Obama and his daughters gave money in envelopes provided at their seats. The first family left after two hours, as the service approached its conclusion.

The president and his family have attended services occasionally since moving to the White House in January 2009. Last Easter, the Obamas worshipped at a Methodist church.