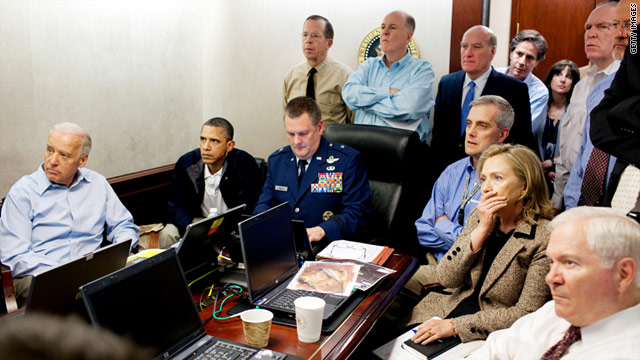 Washington (CNN) -- While the White House and the CIA deliberate whether to release a photo of Osama bin Laden's body, there's debate outside the White House on what impact such graphic images might have.

There is a school of thought inside the White House that the photo release is unnecessary because there is "no question" that bin Laden is dead, a senior administration official told CNN's Gloria Borger.

"We've got the DNA, the facials, the wife (identification) and measurements," the source said. "There is no real issue that he didn't get killed ... What's the point of putting them out when everyone knows he's dead?"

Those opposed believe that "if the point is just to have some shock value, why do it?" the source added.

The decision, the source said, will likely come down to Defense Secretary Robert Gates, Secretary of State Hillary Clinton, among other national security officials.

CIA Director Leon Panetta said Tuesday he thinks a photograph of bin Laden's body will be released at some point, but that it is up to the White House to make the final call.

Bin Laden's death, from all angles

The future of the war in Afghanistan

A key counterterrorism adviser to President Barack Obama said that if the White House does decide to release images, it wants to do it in a "thoughtful manner."

"We also want to anticipate what the reaction might be on the part of al Qaeda or others to the release of certain information so that we can take the appropriate steps beforehand," John Brennan, deputy national security adviser for counterterrorism and homeland security, said on CNN's "American Morning" on Tuesday. "So any other material, whether it be photos or videos or whatever else, we are looking at it and will make the appropriate decisions."

House Intelligence Committee Chairman Mike Rogers, a Republican from Michigan, said he was conflicted over whether the administration should release an image of bin Laden.

"It's something that we're gonna have to work through," Rogers said. "We want to make sure that we maintain dignity, if there was any, in Osama bin Laden, so that we don't inflame problems other places in the world, and still provide enough evidence that people are confident that it was Osama bin Laden."

A senior government official involved in the discussions told CNN's John King that the photo release "could" come Tuesday by the CIA, adding that no decision has been made at the White House.

A government official familiar with intelligence matters says deliberations are leaning toward release and said that there is "growing consensus" to release the photo but emphasizes, "it isn't unanimous and everyone has understandable hesitation."

A senior U.S. official told CNN's Jessica Yellin that the photos were taken at a hangar in Afghanistan. The official described it as a clear picture of bin Laden's face, but he has a massive open head wound across both eyes. Other photos include the raid on the compound and bin Laden's burial at sea.

Emad El-Din Shahin, a professor of religion at the University of Notre Dame, said the administration is in a "tough situation."

"On the one hand, it needs to prove to the world that bin Laden is dead; on the other, it also needs to avoid provoking the sentiments of Muslims and enraging bin Laden's followers. It would be better if the U.S. can prove bin Laden's death without showing his grisly death photos, Shahin said.

Some have suggested that the U.S. release a video of bin Laden's burial at sea, but Shahin said that's an affront to Islam.

"The head of al-Azhar, the Muslim world's oldest religious institution, described the disposal of bin Laden's body in the ocean as, 'an affront to religious and human values.' I think showing this video will not be wise and will reflect an image of American hubris."

At a news conference on Tuesday, Sen. Diane Feinstein, chairwoman of the Senate Intelligence Committee, said she saw no need to release an image since there is other evidence to prove bin Laden is dead.

"I just don't see a need to do it," she said. "The DNA has been dispositive. People may still doubt that therefore there may be cause -- I don't know -- to release the photo which I understand is very graphic."

Former Secretary of State Colin Powell told CNN's "The Situation Room" on Monday that "I don't need to see it."

"He's dead. We all know that," Powell said. "His body has been buried at sea, and I'll leave it up to the administration as to whether it serves any purpose or not."

An advocate of releasing the a image said it would allow the nation to move on.

"The photo should be released no matter how graphic it is," said Mark Pasetsky, a social media strategist, in a Forbes commentary. "The most important thing is to ensure the nation moves forward and experiences closure on this horrific tragedy. A photo of bin Laden dead will do just that and would serve as an exclamation point on Obama's historic announcement."

Senate Homeland Security Committee Chairman Joe Lieberman said Monday that it "may be necessary" to release an image to erase any doubts.

"My own instinct is it's probably necessary to release those pictures, but, you know, I will respect whatever decision the president makes," Lieberman said. "I will tell you this: For my own part, based on information that I've received, I am absolutely convinced that the man who was killed yesterday was Osama bin Laden."

Sen. Susan Collins, the ranking minority member on Lieberman's committee, also said that while she has no doubt that bin Laden is dead, she understands that doubters will need proof to put the matter to rest.

"I recognize that there will be those who will try to generate this myth that he's alive and that we missed him somehow," she said. "And in order to put that to rest, it may be necessary to release some of the pictures or video or the DNA test to prevent that from happening."

Powell said he doubts releasing an image will satisfy doubters.

"There will be skeptics out there as you know whether in the Middle East (or elsewhere)," Powell said. "Even if you show the picture, there'll be skeptics. That's just the nature of the world. Because they'll say it was Photoshopped."

There seems to be no doubt about his death among bin Laden's followers -- chatter on the radical websites that bin Laden's terrorist network used to speak to the world mourned his passing with an edge of defiance, celebrating him as a martyr and vowing al Qaeda will continue despite its leader's death.

There were doubters in the Arab world after the U.S. announced that deposed Iraqi dictator Saddam Hussein's sons Uday and Qusay were killed in a gun battle in July 2003. The Bush administration released images of the two after a mortician had cleaned up their bodies.

CNN's John Blake and the CNN Wire contributed to this report.