Was he ever serious? How Trump strung the country along, again 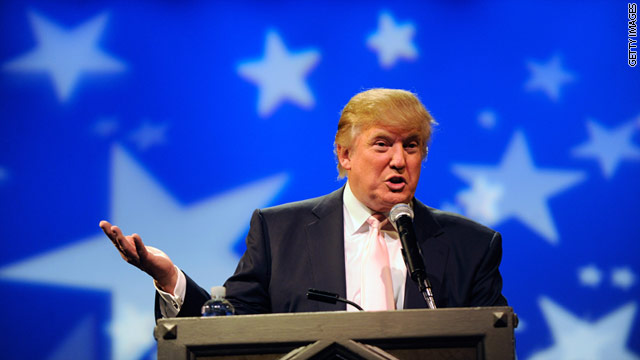 Washington (CNN) -- After setting tongues wagging over the thought of a run for president, launching eye-popping attacks and accusations against the president and other political enemies, openly cursing at more than one political event and even using an interview to name his best orgasm ever, Donald Trump has done it again, essentially firing himself from seeking the top political job in the nation.

On Monday, the real estate mogul announced that he would not run for president.

"After considerable deliberation and reflection, I have decided not to pursue the office of the presidency," Trump said in a statement. "This decision does not come easily or without regret."

But, Trump added, "I maintain the strong conviction that if I were to run, I would be able to win the primary and ultimately, the general election," tossing one last scrap of meat to critics who have called the real estate mogul arrogant.

The (at least) three-time White House flirt suggested that, this time around, his heart was not fully in the race. "Business is my greatest passion and I am not ready to leave the private sector."

So did Trump really intend to run this time -- or ever?

For more than 20 years, the billionaire has teased about a possible presidential run with various iterations of the same statement, saying he "might" run for president (in 1988), was "considering" it (in 2000) or was "very seriously" mulling it over (in 2004).

Each time, he's decided not to run.

When Trump, 64, first began to float his name in the race this year, he pushed conspiracy theories with unproven claims about the president's birthplace.

Trump slammed President Obama on a wide range of other issues but also lashed out at fellow Republicans, calling George W. Bush one of the worst presidents ever and criticizing other possible presidential contenders like Mitt Romney and Texas Rep. Ron Paul.

At one recent event in Las Vegas, Trump launched an F-bomb tirade as he attacked American policies. At a Tea Party event in Boca Raton, Florida, Trump said it was "chicken (expletive)" as he questioned whether President Obama wrote his two books himself. And in a Rolling Stone interview, Trump described his best orgasm ever.

And yet, much of the buzz surrounding the populist Trump endeared him to many conservatives. On one hand, polls show that many conservatives hunger for a more satisfying crop of candidates than they have. On the other hand, conservatives loved the anti-Obama fare that Trump served them.

Early polls showed Trump's popularity rising within the GOP, only to crash spectacularly among voters overall.

Then it all began to change.

First, the president silenced the birther theories pushed by Trump and others by releasing his long-form birth certificate. Two days later, Trump became the butt of scathing jokes from both the president and "Saturday Night Live" comedian Seth Meyers at the White House Correspondents Dinner in Washington.

Then, about a week later, the president announced the killing of Osama bin Laden, a highly regarded move that all but silenced Trump's criticism of Obama's stewardship on national security matters.

Opinion: Is Trump playing us for suckers?

By the time Trump re-emerged in New Hampshire, his polling numbers had significantly slipped.

Last week, a CNN/Opinion Research Corp. poll showed Trump with an unfavorable rating of 64 percent and said he would lose to the president by 22 points in a general election matchup.

On Monday, a survey from Politico and George Washington University indicated that 71 percent of Americans think the business mogul has "no chance" of ever winning the White House.

On the day before Trump's announcement that he would not run, the television network that airs "Celebrity Apprentice" said the show would go on without Trump if he decided to run. It has since been added to the midseason replacement lineup.

NBC entertainment chief Bob Greenblatt said he hoped Trump would return next season as the man behind the firings on the hit TV show, calling him "fascinating" and "entertaining." But Greenblatt added, "If he decides to run for president and is unavailable to do the show, we will bring the show back, and there will be somebody else sitting at the head of the boardroom table."

In his Monday statement, Trump thanked his supporters and promised that he would "continue to voice my opinions loudly."

For Donald Trump, anything can happen in four more years.