Obama wraps up Europe trip with visit to Poland 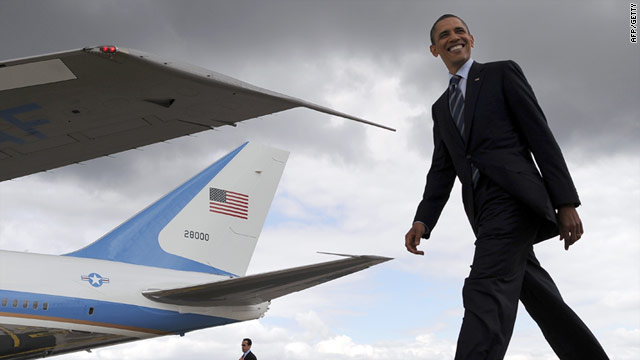 Barack Obama walks on the tarmac while changing Air Force One Boeing 757 to 747 at Orly airport near Paris on Friday.
STORY HIGHLIGHTS
RELATED TOPICS

(CNN) -- President Barack Obama was in Poland Friday after wrapping up two days of meetings in France with other leaders of the world's top economic powers.

The president's visit to Poland -- the conclusion of a six-day, four-nation trip to Europe -- included a stop at that country's World War II Warsaw Ghetto Memorial and a dinner with Central and Eastern European leaders hosted by Polish President Bronislaw Komorowski.

"We have taken great inspiration from the blossoming of freedom and economic growth in this region, and we're confident that will continue," Obama said at the start of the dinner.

"We want to be a part of that process of strengthening your democracies (and) your economies ... because we think that will be beneficial to the United States as well."

Defense issues were expected to top the agenda during Obama's time in Warsaw.

During his visit to France, the president discussed a range of economic and security matters with the other heads of the Group of Eight nations. The G8 includes the United States, the United Kingdom, France, Canada, Japan, Germany, Italy and Russia.

At the conclusion of the G8 Summit, the leaders issued a statement expressing support for the democratic uprisings in the Middle East and North Africa. They also unveiled an initiative called the Deauville Partnership, named for the French city where the summit was held.

The aim of the partnership, among other things, is to promote greater integration for Middle Eastern economies on both the regional and global level. The leaders asked senior foreign and finance ministries to meet in coming months to forge a framework for the effort.

"The aspiration of people for freedom, human rights, democracy, job opportunities, empowerment and dignity has led them to take control of their own destinies in a growing number of countries in the region," the leaders declared.

Obama told Kan that Americans were "heartbroken" by the devastation created by Japan's recent tsunami and subsequent nuclear disaster.

The president pledged that America "will stand by Japan for as long as it takes for Japan to recover."

Earlier in the week, Britain's Queen Elizabeth II hosted a state dinner for the president. Obama also became the first U.S. president to address a joint session of the British Parliament at London's famed Westminster Hall.

Obama's trip began with a stop in Ireland on Monday, where he made a visit to his ancestral home in the village of Moneygall.