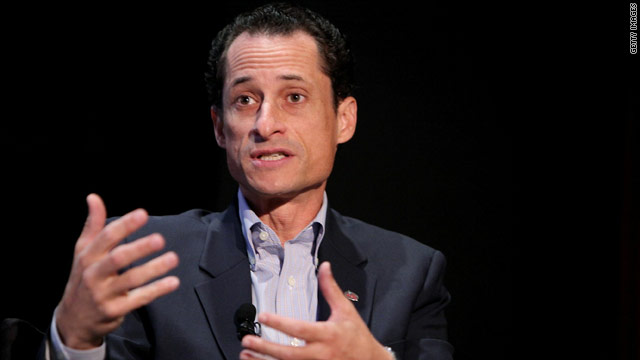 (CNN) -- A weekend controversy involving a lewd photo posted on the Twitter account of Rep. Anthony Weiner is a "prank" caused by a hacker, Weiner told CNN on Monday.

Weiner, a New York Democrat who is one of the leading liberal voices in the House, blamed the photo on a hacker who got control of his social networking accounts.

"Look, this is a prank and not a terribly creative one," Weiner told CNN in an exclusive interview Monday, adding: "I was hacked. It happens to people. You move on."

However, Weiner's spokesman, Dave Arnold, said the congressman has retained an attorney to look into the situation.

"We've retained counsel to explore the proper next steps and to advise us on what civil or criminal actions should be taken," Arnold said in a statement. "This was a prank. We are loath to treat it as more, but we are relying on professional advice."

The Capitol Police and FBI told CNN they're not currently investigating.

The woman, identified as a 21-year-old college student, subsequently issued a statement to the New York Daily News in which she said she never had met Weiner though she followed him on Twitter and had once jokingly referred to him as her "boyfriend" in a tweet.

She indicated that the post had come from someone other than Weiner, and added that "this person had harassed me many times."

"I am not sure whether or not this letter will alleviate any future harassment," said the statement by Gennette Nicole Cordova, published Sunday by the Daily News. "I also do not have a clear understanding as to how or why exactly I am involved in this fiasco. I do know that my life has been seriously impacted by speculation and faulty allegations. My reputation has been called into question by those who lack the character to report the facts."

Breitbart, who has been involved in questionable tactics against Democrats and liberals in the past, said in a statement that the case warrants further investigation.

Breitbart called for "forensic analysis to determine the veracity of Congressman Weiner's hacking allegation, which certainly bears criminal implications," as well as further investigation of other women linked to Weiner through Twitter.

Weiner called the story a "distraction" and insinuated political opponents were trying to use it to deflect attention from their own troubles.

"Look, you've got the Republicans who are playing games with the debt limit, you've got a Supreme Court justice who's refusing to recuse himself despite conflicts of interest, you have a health care act that's under siege. You know this is a distraction," he told CNN. "I get it."

After the photo was posted and then taken down, Weiner tweeted about it over the weekend, including one that said his Facebook account had been hacked.

"Is my blender gonna attack me next?" the tweet said.

"Friday evening I logged onto Twitter to find that I had about a dozen new mentions in less than an hour, which is a rare occurrence," Cordova's letter said. "When I checked one of the posts that I had been tagged in, I saw that it was a picture that had supposedly been tweeted to me by Congressman Anthony Weiner. The account that these tweets were sent from was familiar to me; this person had harassed me many times after the congressman followed me on Twitter a month or so ago. Since I had dealt with this person and his cohorts before I assumed that the tweet and the picture were their latest attempts at defaming the congressman and harassing his supporters."

Last year, Breitbart posted online a heavily edited and incomplete video of a speech by U.S. Agriculture Department employee Shirley Sherrod that suggested she refused to offer her full help to a white farmer. Sherrod was forced to resign, but a full version of the speech showed that Sherrod had assisted the farmer, who later came forward and credited Sherrod with helping save his farm.

Sherrod has filed a civil suit accusing Breitbart of defamation, false light and infliction of emotional distress, according to a statement issued by the law firm representing her.

CNN's Dana Bash and Kiran Khalid contributed to this story.