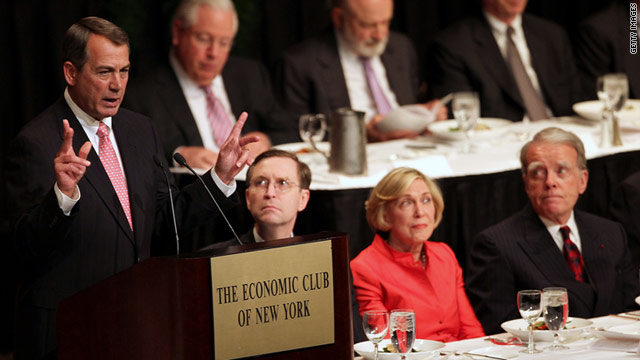 Washington (CNN) -- In a symbolic vote to send a message to budget negotiators, the House on Tuesday defeated a measure to raise the national debt ceiling without any accompanying deficit or spending reduction provisions.

The Republican-controlled House voted 318-97 on the legislation that would have raised the federal government's debt limit by approximately $2.4 trillion.

Under rules for the vote set by the GOP leadership, the measure needed at least two-thirds support to pass, ensuring it had no chance for approval.

The vote was scheduled by Republican leaders to show that any attempt to divorce an increase in the debt ceiling from spending reduction efforts -- a move initially favored by the Obama White House -- cannot win congressional approval.

Democrats called the move a dangerous political stunt that could rattle financial markets.

W.H.: 'The debt ceiling must be raised'
RELATED TOPICS

"We understand the views that are being expressed" by the vote, White House Press Secretary Jay Carney told reporters before the vote. "We share the concerns that drive those views. (But) in the end, the debt ceiling has to be raised."

President Barack Obama is scheduled to meet with congressional Republicans on Wednesday as part of the administration's ongoing debt-ceiling and related budget negotiations. Vice President Joe Biden has been holding similar talks with a bipartisan congressional delegation in recent weeks.

The federal government hit its current debt ceiling limit of roughly $14.3 trillion on May 16. Treasury Secretary Tim Geithner has indicated he can keep the country out of default until August 2, but warned of potentially devastating financial consequences after that point.

Numerous analysts say that a failure to reach an agreement raising the debt limit could lead to skyrocketing interest rates, a plummeting dollar and a higher cost of living for most Americans.

Democrats have argued that any attempt to attach conditions to an increase in the ceiling is akin to playing a game of "chicken" with the economy. They also complained that Tuesday's vote was a political stunt by Republicans that could rattle U.S. and global markets.

House Democratic Whip Steny Hoyer, who supports a so-called "clean" extension of the debt limit, advised House Democrats prior to the vote to reject "this irresponsible piece of legislation that should have been handled in a bipartisan fashion."

GOP leaders, who campaigned in 2010 on an agenda of fiscal responsibility, oppose any increase in the debt ceiling without major spending cuts.

House Speaker John Boehner, R-Ohio, declared earlier this month that the overall size of any spending cuts has to exceed the magnitude of any debt-ceiling increase.

Senate Minority Leader Mitch McConnell, R-Kentucky, has said that any vote in favor of raising the ceiling should be accompanied by significant new cuts in discretionary spending over the next two years, followed by significant changes over the longer term to costly entitlement programs such as Medicare and Medicaid.

The question of how to control the explosive growth in popular entitlements may be the most critical question in the current debate over Washington's fiscal health. Leaders from both parties agree that some kind of change is necessary in Medicare in particular, but differ sharply on scope and shape.

Democrats are pushing for tax increases on wealthier Americans as a way to reduce the need for sharp cuts. They have ripped their GOP counterparts for allegedly taking advantage of the current crisis to try to dismantle a social safety net in place since President Lyndon Johnson's Great Society.

Under Ryan's plan, which aims to cut federal deficits by roughly $4.4 trillion over the next decade, Medicare would be overhauled starting in 2022. The government would no longer directly pay bills for senior citizens in the program. Instead, recipients would choose a plan from a list of private providers, which the federal government would subsidize.

While individuals currently over the age of 55 would not be affected by the changes, numerous political strategists believe the proposal will prove to be deeply unpopular among seniors. Democrats captured a traditional Republican U.S. House seat in western New York this month after running a campaign highlighting their opposition to the Ryan plan.

Last year, GOP leaders repeatedly attacked the change to the health care law pushed through by Democrats, arguing that it would weaken Medicare. Republican congressional candidates crushed their Democratic counterparts among voters age 65 and older in the November congressional elections, carrying seniors by a 21-point margin.

While voters have expressed concern over the growing debt, they have also shown strong opposition to major entitlement spending reductions.