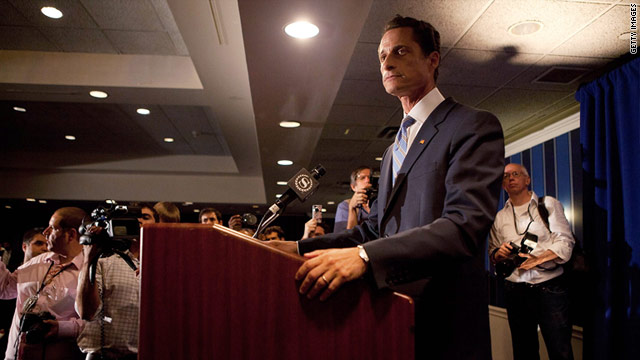 New York (CNN) -- As news of his admission and apology reverberated Tuesday throughout the country and in the halls of Congress, those who hold Rep. Anthony Weiner's political future in their hands debated whether the scandal will be his downfall.

Some voters in Weiner's district said he should "never resign," while others called for his immediate ouster.

While Weiner -- first elected to Congress in 1998 -- has generally enjoyed strong backing in New York's 9th District, his confession Monday that he has sent lewd photos of himself to women, had inappropriate relationships, and lied to the media unleashed a series of questions about his political future.

What do you think about Rep. Weiner's confession?

"It's scary that, you know, a political person that we elected would be able to do something like that," said Ally Nekta, a voter in Weiner's New York district.

Weiner has said he will not give up his seat.

Breitbart shocked Weiner would 'fess up'

Eva Slomobits, 82, has lived in Sheepshead Bay for 50 years. When asked Tuesday whether Weiner should resign, the lifelong Democrat -- who campaigned for him -- said, "Yes. I definitely won't vote for him, I think of him as a different person."

"He betrayed his wife," Slomobits added. "You have to think before you make a mistake."

Others took the opposite position.

"Actually, I'm glad he's not resigning," Patrick Riley said. "What he does on his personal time is his business."

Jenny McCourt, a registered Republican who has lived in the district 40 years, said Weiner should "definitely not" resign. "He's a human being," McCourt said. "He made a mistake."

"I think he's one of the most effective, decent congressman out there," said Brooklyn native Richard Elliott. Weiner's behavior was "stupid," Elliott said, but not something to resign over.

He also said, "I find it ridiculous that that would be the news" when so much else is going on in the world.

House Minority Leader Nancy Pelosi announced that she would call for an ethics committee investigation "to determine whether any official resources were used or any other violation of House rules occurred."

Weiner insists no government resources were used. He issued a statement saying he would "welcome and fully cooperate" with the probe, which other Democratic leaders also rallied behind.

Senate Majority Leader Harry Reid, when asked about the controversy Tuesday, said, "I've known Congressman Weiner. I wish there was some way I could defend him, but I can't."

Later, when asked what he would do if Weiner called him for advice, Reid replied, "I'd tell him to call someone else."

If Weiner were to resign or be compelled to leave office, New York Gov. Andrew Cuomo, also a Democrat, would determine the timing of a special election to replace him.

Whether or not he holds onto his congressional seat, many analysts believe he will pay a tremendous political price: losing his spot as a frontrunner in New York's 2013 mayoral election.

"He would have had my vote. Not now," said Ralph Polese, 55, a retired school custodian. Polese also said Weiner should resign from Congress "because of the way he disgraced his family."

New York Mayor Michael Bloomberg said Tuesday, "It's hard to believe, given the coverage that all of the press has given this situation, that any voters in his district aren't familiar with the situation, what happened, whatever, and they will have an opportunity to express themselves in one year and four months from now. In the meantime, you know, I keep saying, this country has lots of very big problems that maybe we should all focus on and Congress should certainly get back to work and focus on."

Republicans have jumped on the situation, targeting Democrats who have accepted financial donations from Weiner over the years.

The news releases don't suggest Weiner collected money inappropriately, but they refer to him as "ethically troubled" and call on the lawmakers to return his money and "condemn Weiner's outrageous behavior."

One focusing on Rep. Tim Walz, D-Minnesota, notes that he has received a total of $3,000 from Weiner in the past.

Weiner's admission Monday came a week after he claimed a hacker had posted a lewd photo to his Twitter account.

Speaking at a news conference Monday, he said he had carried on inappropriate relationships with several women he had met online.

Weiner said he is not planning on separating from his wife, Huma Abedin, a longtime aide to Secretary of State Hillary Clinton.

He said he took "full responsibility" for his actions -- both the relationships and for lying about sending the photo last month of his bulging underwear on his Twitter account.

"To be clear, the picture was of me, and I sent it. I'm deeply sorry for the pain this has caused my wife, and our family, my constituents, my friends, my supporters and my staff," he said, claiming he meant to send the photo as a direct message -- which is private -- as a "joke" and then "panicked" after he realized he had tweeted it, which anyone can see.

"I lied because I was ashamed at what I had done, and I didn't want to get caught," he said.

An emotional Weiner described his actions as "dumb," "destructive" and "deeply, deeply hurtful" -- both for his admitted cover-up and for repeatedly engaging in "inappropriate conversations conducted over Twitter, Facebook, e-mail and occasionally on the phone" with women he'd met online, mostly via Facebook.

The congressman claimed that he never met any of the women in person, and that his wife learned he'd been lying about the Twitter picture on Monday morning.

The admission came hours after images were published on BigGovernment.com, a conservative website run by Andrew Breitbart, that apparently show Weiner shirtless.

Weiner said he "exchanged messages and photos of an explicit nature with about six women over the last three years." Some of those relationships began before his 2010 marriage; some continued -- and others began-- afterward, he said.

During his news conference, Weiner apologized "to everyone that I misled in the media" -- including Breitbart -- but most of all to his wife.

"This was me doing a dumb thing, and doing it repeatedly, then lying about it," Weiner said.

Weiner initially released written statements claiming that he was the victim of a hacker and a prank. Then, during a testy press conference, he dodged questions about whether the photo was of him and why he hadn't asked law enforcement to investigate if his account had been compromised.

The following day, in a series of interviews, he said he could not say with "certitude" if the photograph was of him. He also deflected recent questions from CNN, saying he had hired an attorney at the firm of Baker Hostetler to look into the matter.

The woman who received the Twitter photo in late May, Gennette Cordova, denied on her own account that she was one of the women with whom Weiner admitted having an "inappropriate relationship."

ABC News reports that Meagan Broussard, a 26-year-old single mother from Texas, provided them with dozens of photos, e-mails, Facebook messages and cell phone call logs related to her relationship with Weiner.

In a posting on BigGovernment.com, Broussard said she was a U.S. Army veteran and full-time college student who, on April 20, went to Weiner's Facebook page and commented that the congressman was "hot" on one of his videos. She said the two began corresponding "within an hour," adding that she didn't know if he is a "horrible person" but decided to speak out after hearing he'd "hired an investigative firm to go through all of his files."

Many Democrats first rallied around the liberal congressman. But members of the House Democratic leadership have talked repeatedly in recent days to try to get him to end what has become, to them, an unwelcome political distraction, a member of the party's leadership told CNN before Weiner's press conference Monday.

"It's frustrating because we'll talk to him and say clean it up, and then he goes out and does stuff," said the member of the House Democratic leadership, who declined to speak on the record about private discussions with Weiner.

"He's got to put the period at the end of the sentence," the Democratic source said before Weiner's confession. "It's painful."